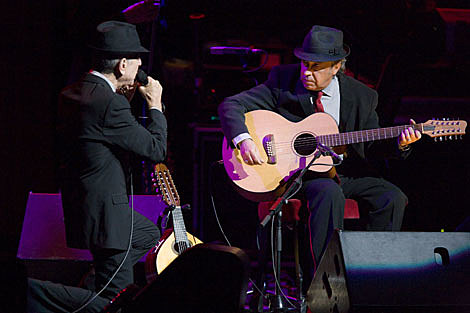 To accommodate overwhelming popular demand, AEG Live has announced the addition of a second Leonard Cohen show at New York's Radio City Music Hall on Sunday, May 17. This newly added second date follows the originally scheduled concert on Saturday, May 16, which attracted an incredible fan response when it was announced with an American Express early ticket on-sale last week. Audiences are clamoring for a chance to catch this intimate, superbly crafted concert as part of Cohen's 2009 North American Tour, featuring the singer/songwriter/poet, his acclaimed band, and a beloved catalog of music.

A "friends and family" presale begins Friday at 10 AM for the May 16th Radio City show (the password might be JARKKO or thisisnottherealone ). A Fan Club presale begins Saturday at 10 AM. Regular sale begins Monday at 10 AM which is when the May 17th show goes on sale, though at the moment it still isn't listed on Ticketmaster.

In related news, Ticketmaster can't get out of the news. To quote Reuters, "Ticketmaster settled with the state of New Jersey to resolve more than 2,000 complaints over how it had handled ticket sales for Bruce Springsteen concerts, and Canadians are now complaining about inflated prices to hear Leonard Cohen."

New shows have also been announced in Boston, Austin, Oakland, LA and Chicago. Videos from the Beacon Theatre show, and updated tour dates, below...