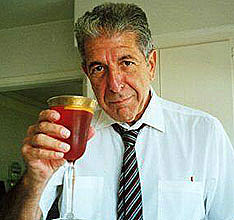 So they said the presale was going to start at noon and it was on Ticketmaster at that time, but then Leonard Cohen's "fan club" was told the password wasn't being released until 1:30PM for a new 2:00PM start time, but then Siobhan (thx!) kindly posted it in the comments at 12:55 and it works.

P.S. since my first post, they officially announced the following: "For the first time since 1993, Leonard Cohen will perform in the U.S. on February 19th at The Beacon Theatre in New York City . For one night at the 2,800 seat venue Leonard Cohen will perform the show that earned more than 80 five-star reviews during his fall 2008 UK and European tour. Tickets will go on sale beginning Friday, January 16th at 9:00 AM." Note the on-sale date is the regular sale time. Also, technically Leonard has performed in the U.S. in the past fifteen years, maybe just not an actual full show.