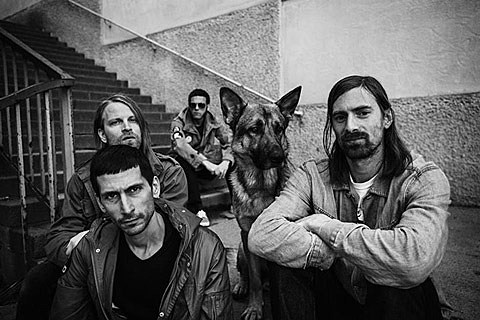 Swedish musicians Joakim Åhlund and Frans Johansson each had their own careers going when they started making music. Frans was in post-grunge band Fireside; while Joakim spent time in both Caesars (remember "Jerk it Out") and Teddybears (remember them too?) The two bonded over a love of motorik psych and formed their own singleminded groove band Les Big Byrd.

Around the same time they struck up a friendship with Anton Newcombe, who had Joakim sing "Vad Hände Med Dem?" on the Brian Jonestown Massacre's terrific new album, Revelation, and also invited Les Big Byrd to record at his Berlin studio. The results of that are LBB's new album, They Worshiped Cats, which came out in the spring via Anton's A Recordings. If you dig Neu!, The Soundtrack of Our Lives, and TOY this will definitely scratch your itch. Check out a few videos and some tracks from the album in this post, as well as a new 7" that was available only at shows on their European tour with the BJM.

No live dates for North America yet but we hear they are aiming for spring 2015 with an eye, of course, on SXSW. Stay tuned. The band do have some upcoming European dates with fellow psychic Swedes, GOAT. All dates, plus videos and streams, below...

Les Big Byrd - "Back to Bagarmossen"