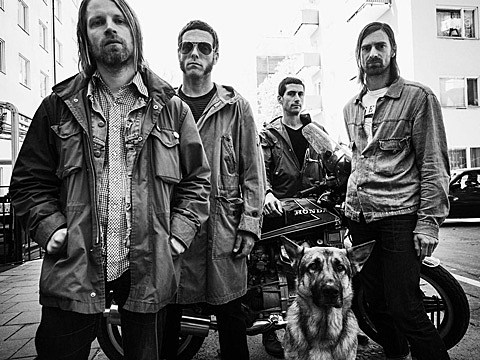 Sweden's Les Big Byrd, which features Joakim Åhlund (Caesars, Teddybears) and Frans Johansson (Fireside), will release a new EP, titled Stockholm Death Star, on May 4 via Anton Newcomb's A Recordings. The instrumental title track is a motorik groover that rockets along, and makes its debut in this post. Have a listen, and check out a couple videos from last year's very good They Worshipped Cats, below.

Les Big Byrd will be making their first trip to North America for Austin's Levitation Fest and California's Desert Daze next month and will play a other shows shows while here. Dates include two in NYC: May 11 at Baby's All Right and May 12 at Cake Shop. Tickets to Baby's show will be on sale soon.

All dates are listed, along with the song premiere, below...