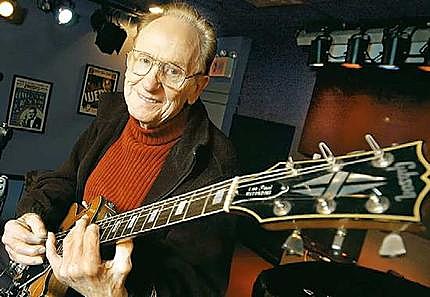 "Les Paul, the guitarist and inventor who changed the course of music with the electric guitar and multitrack recording and had a string of hits, many with wife Mary Ford, died on Thursday. He was 94.

According to Gibson Guitar, Paul died of complications from pneumonia at White Plains Hospital. His family and friends were by his side.

As an inventor, Paul helped bring about the rise of rock 'n' roll and multitrack recording, which enables artists to record different instruments at different times, sing harmony with themselves, and then carefully balance the "tracks" in the finished recording." [AP]

Les continued to perform right up until the end! Almost every Monday at Iridium Jazz Club right here in NYC (where "You Never Know who will show up"). RIP Les!
Videos below...

In July 2005, a 90th-birthday tribute concert was held at Carnegie Hall in New York City. After performances by Steve Miller, Peter Frampton, Jose Feliciano and a number of other contemporary guitarists and vocalists, Les was presented with a commemorative guitar from the Gibson Guitar Corporation.