American post-rockers Saxon Shore hit back. It Doesn't Matter, the quintet's follow-up to 2005's The Exquisite Death of Saxon Shore is a welcome return to form for the band and their original leader Matthew Doty.

Having gone through a long period of upheaval - be it line-up changes and relocations - the band spent four solid years as a unit before plucking up the courage to hit the Tarbox Road Studios Cabin out in Cassadega, New York.

Apt then, that the unearthing of It Doesn't Matter follows a line of melodic delicacy that recent post-rock efforts appear to have departed. Album opener "Nothing Changes" rocks gently into the onslaught of feedback drenched guitars while 'Bar Clearing Good Times' maintains an unexpected steadiness that other same-vein bands like Explosions In The Sky often make the habit of breaking from. -[Altsounds]

Saxon Shore released their gorgeous Dave Fridmann-produced LP It Doesn't Really Matter last year. The song "This Place" from that album is available for download above. You can catch the band live (their only upcoming scheduled show) at the Knit on 2/5 as part of the Sounds Like Brooklyn Festival put on by BAM ("60+ shows. 15 venues. 2 weekends. Celebrating Brooklyn's best music and bands with shows throughout the borough.") American Dollar and The Abbasi Brothers open the NYC show. Tickets are on sale. 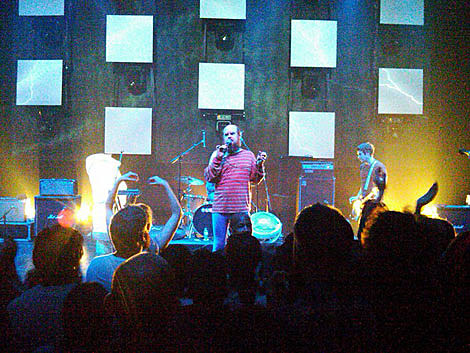 'Sounds like Brooklyn' kicked off last night (1/29) at BAM (the only venue hosting shows during this first weekend of the fest) with Les Savy Fav and Vivian Girls...

"To my surprise, [Les Savy Fav] played very tight rhythms that zagged all over the place but were not sloppy. I was reminded of times I had seen Modest Mouse, Built To Spill or The Flaming Lips, with the music being loose and jangly, yet deliberate and well-crafted at the same time. The band itself held my interest quite well, as they played the straight men to the antics of Harrington, who, instead of being a distraction, complemented the instruments rather well, reminding me at times of Jello Biafra with his voice and dialogue with the audience. Yes, he was a crazy looking fat dude running all over the stage and into the crowd, but his angry-goofy-gibberish song rants, energy, enthusiasm and sheer earnestness overcame my pre-judgment. At the start of LSF's set, Harrington dropped into the crowd beckoning people to stand, and it ended up being the right thing to do. Despite the opera house setting with assigned seating, it quickly became apparent that it would take a lot more than that to contain the force that is Les Savy Fav." [Qbertplaya]

The fest continues tonight (1/30) at the same venue with a show by Rain Machine and Anti-Pop Consortium. Tickets are still available. The Antlers and Ra Ra Riot play the opera house venue on February 5th.

The full Sounds Like Brooklyn schedule, along with a Les Savy Fav video from last night, below...