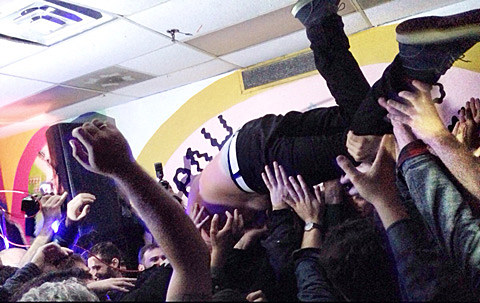 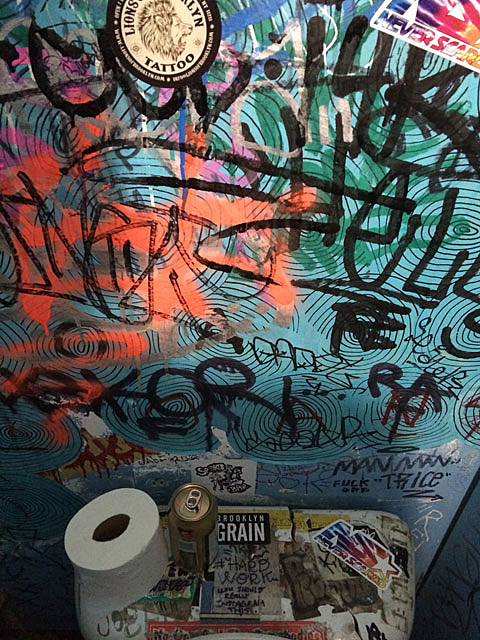 Les Savy Fav were the "super secret headliner" at the eighth to last Death by Audio show on Saturday (11/15) that was already stacked with great local openers who have all frequented the venue -- Yvette, Big Ups and Ovlov -- handpicked by the headliners themselves. Doors opened at 8, and even a half hour beforehand the line outside was down the block. Once they opened it moved pretty quickly though, and we heard it sold out during or right after Ovlov's opening set.

Ovlov brought their usual enjoyable set of Dinosaur Jr-isms, and (as you can see pictured below), they also brought their friend and former Exploding In Sound labelmate Sadie Dupuis of Speedy Ortiz to sing guest vocals on their last song. That was the second appearance Sadie made during DbA's final run, having played with Speedy Ortiz earlier that week.

Big Ups, another band in the EIS family, followed, pulling from the same era of American indie as Ovlov but from Dischord/Touch & Go style post-hardcore rather than the latter's SST love. They were great, and as always their singer was a thrill to watch.

Yvette were the most intense band of the night, playing in white light and powering through their industrial/noise-infected jams. The whole thing was a total sensory overload. They don't usually say much during their sets, but took the time to say thank you to a list of names associated with the closing venue.

Then came the night's secret headliner (though not a secret anymore at that point), Les Savy Fav who haven't played a show in a while. Before they went on, Syd Butler (who just ran the NYC Marathon!) said his dad was at the show, at which point Tim entered the stage dressed as a graying old man. That was only one of Tim's costumes for the night. He also appeared as a superhero not long after, and of course was shirtless for much of it. As you'd expect from a LSF show at DbA, the place was nuts for them the whole time. (It felt less overpacked than Ty Segall the night before, however.) The whole front half of the room was just a sea of bodies jumping up and down and pushed in every direction. Tim was everywhere himself too, whether he was running to the back of the crowd and back to the stage, crowdsurfing, popping back into the green room, unwinding the Christmas lights over the entrance door, or headed upstairs. Here's hoping that was not the beginning and end of Les Savy Fav's return, though we know they don't all live in the same city anymore, and Syd is especially busy with other projects (like running Frenchkiss Records and being a member of the Late Night band which LSF's Seth is also in).

If you were there, or at any of these other final shows, have you checked out the "Death by Art" exhibition they have set up? The whole thing is pretty nuts and a lot of it is interactive. In addition to the art on display, make sure to check out those little rooms in the back -- different surprises in every one! There's also a net to hang out on, and a bar in the back, which as you can see in the pictures below features Death By Audio co-founder/APTBS frontman Oliver Ackermann as bartender.

Merch for sale includes special "Goodbye Death By Audio" t-shirts, posters from previous nights, and the poster for that night which in this case was designed by Tim Harrington. it's pictured below.

Death by Audio now has only FIVE NIGHTS LEFT. Future Punx, Priests, Downtown Boys, Pinkwash and B-Boys played last night, and Fiasco headlined the night before that (which was one night after Les Savy Fav). The rest are all top secret.

More pictures and some video from the Saturday night show, below... 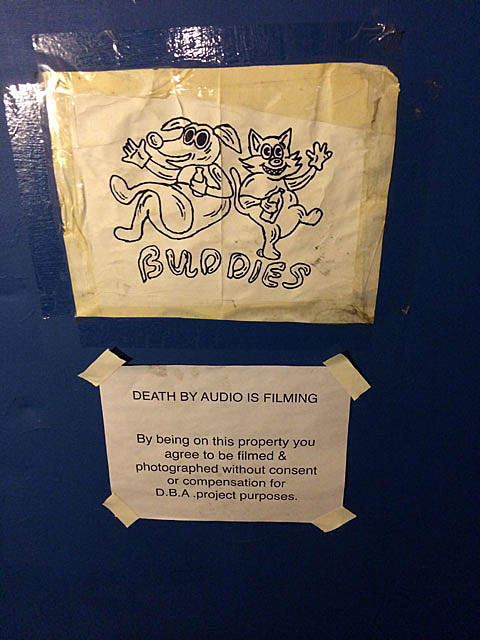 Sadie from Speedy Ortiz joining Ovlov at Death by Audio.

Big Ups at Death by Audio. Yvette and Les Savy Favstill to come. 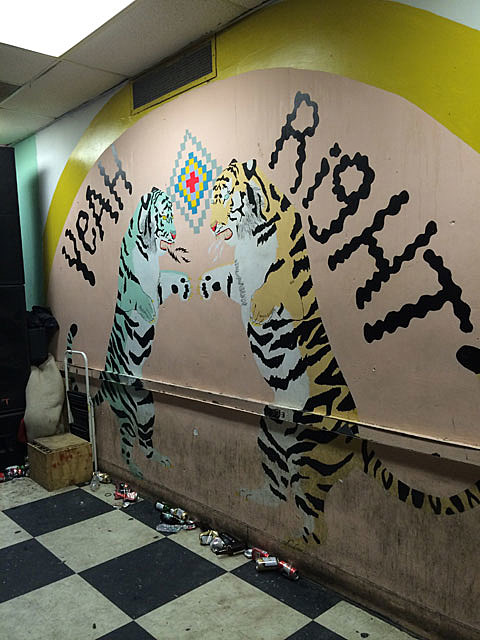 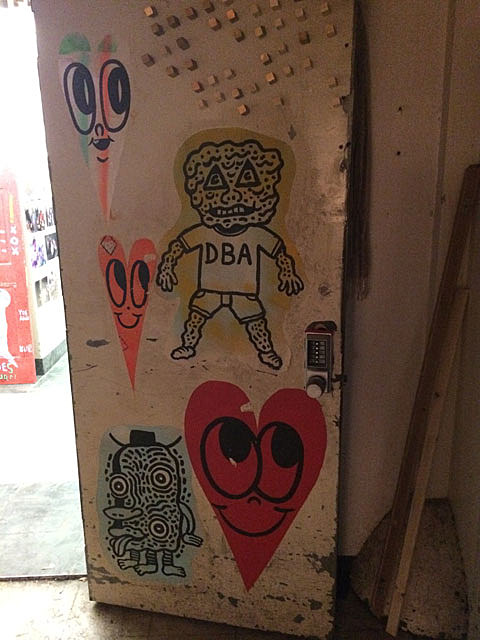 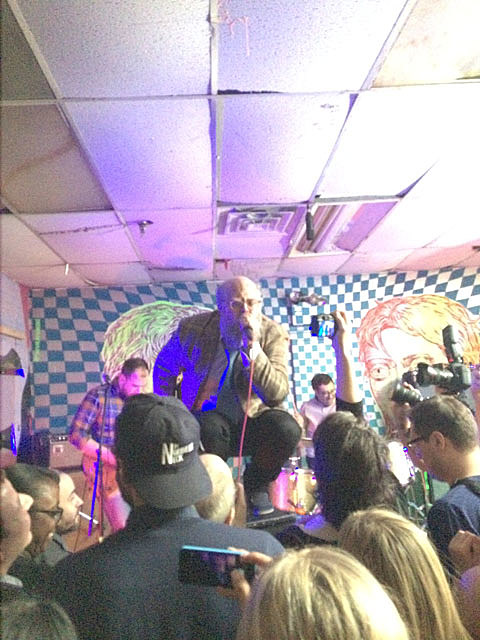 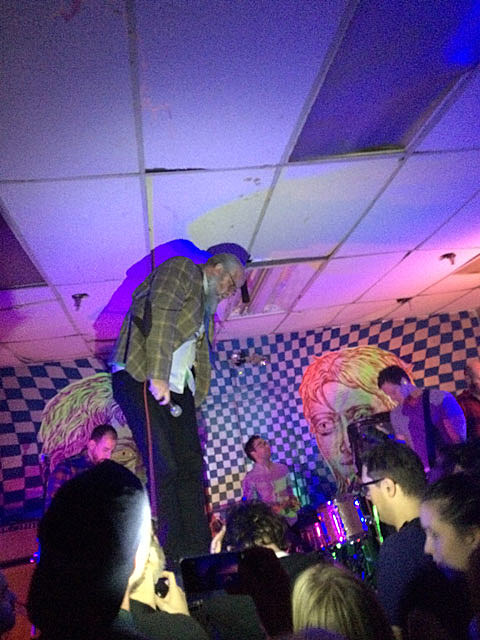 "We've been sending our demos to Death by Audio for years, excited to finally get a show" -- Les Savy Fav. 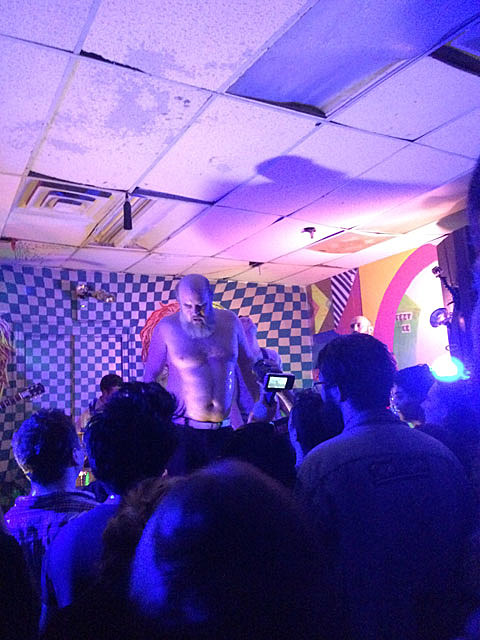 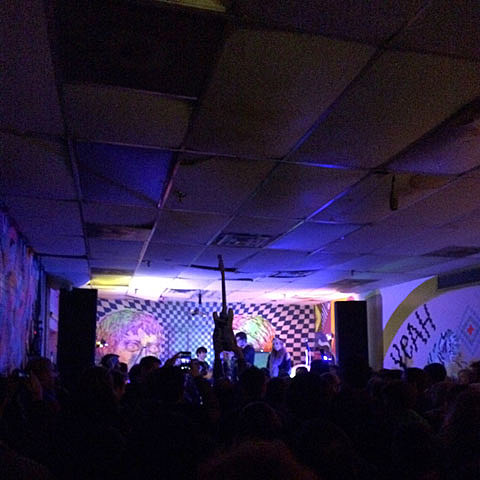 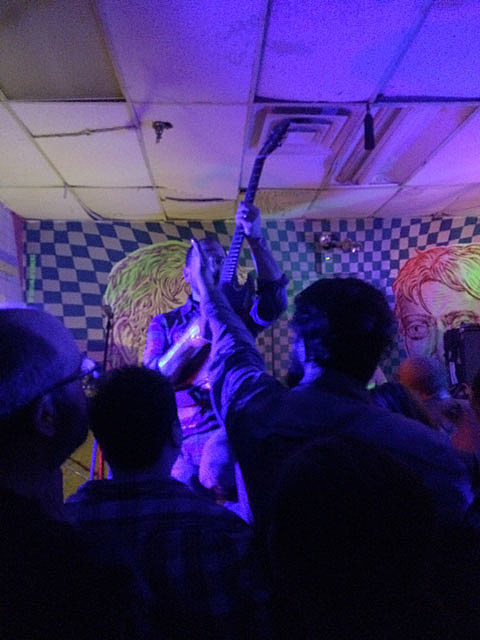 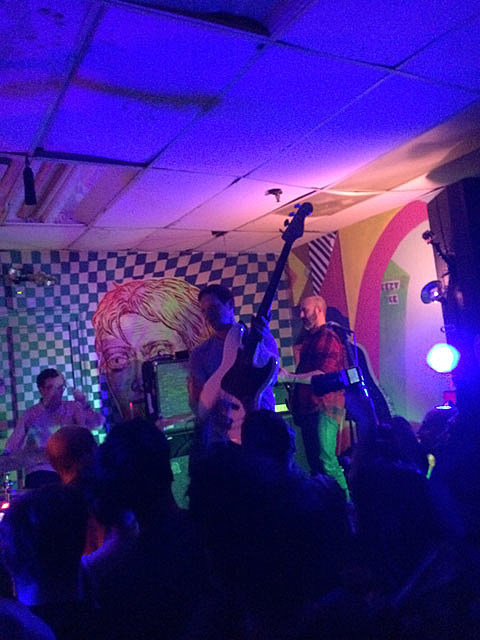 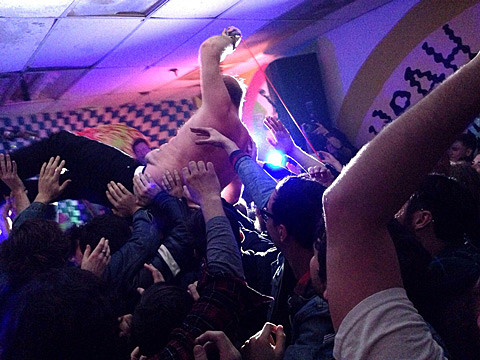 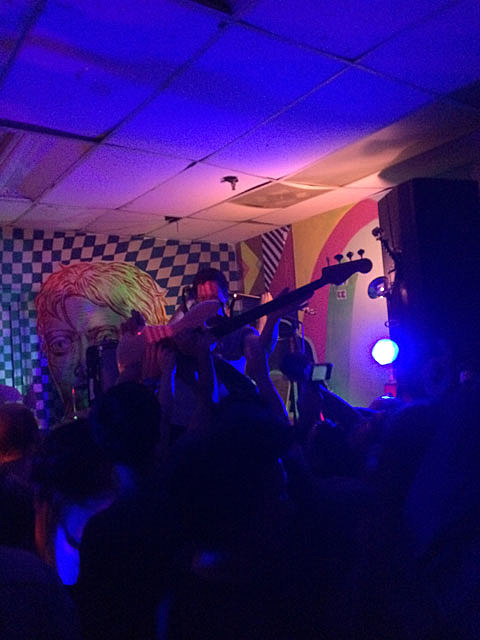 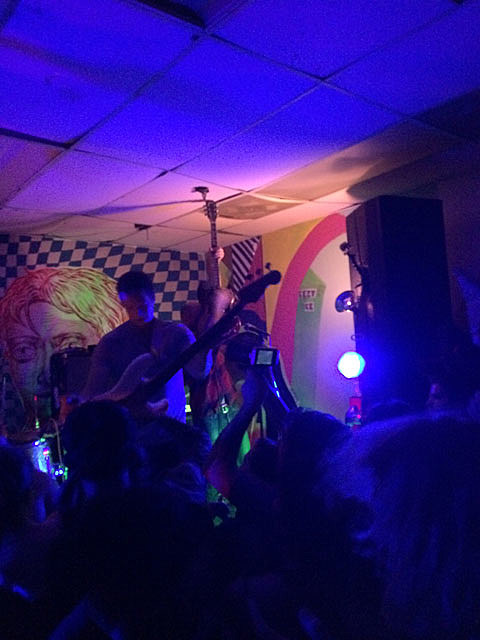 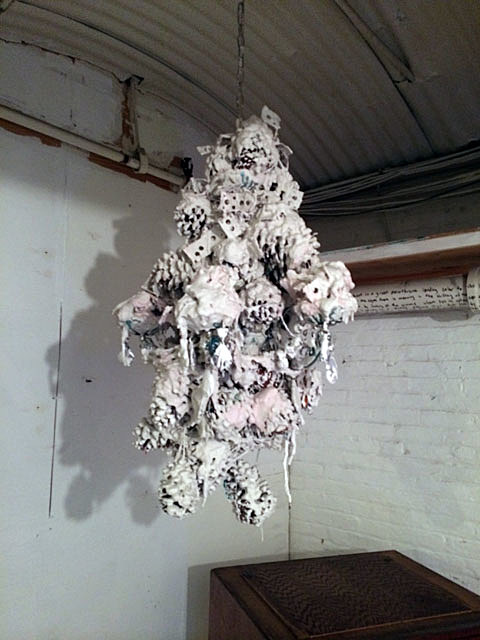 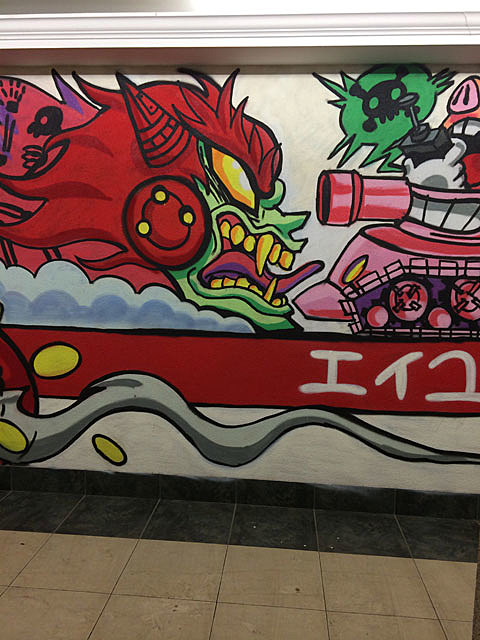 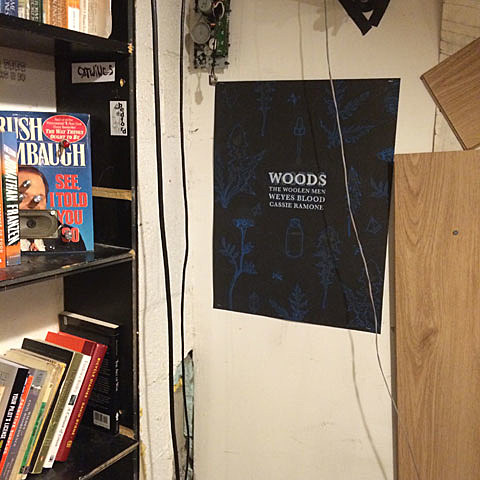 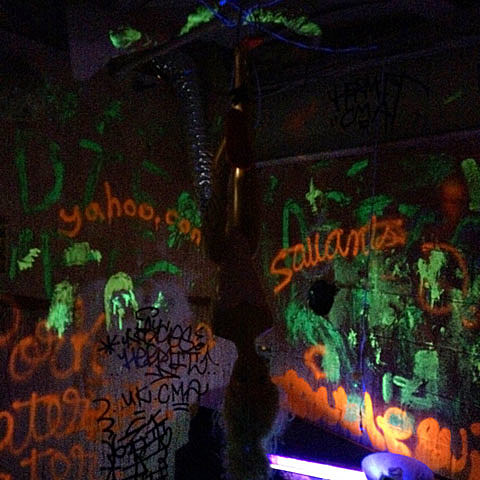 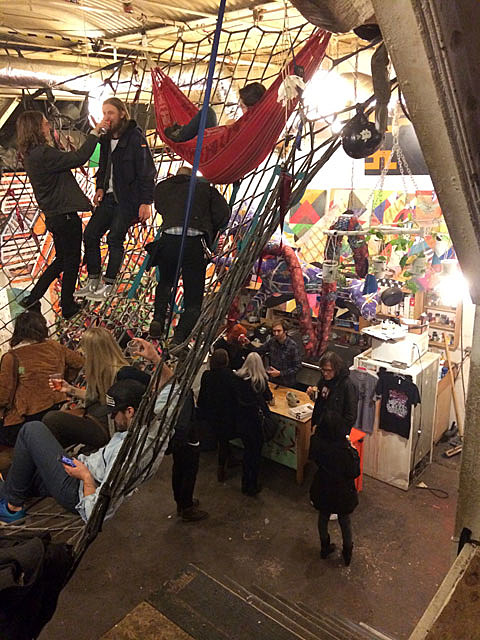 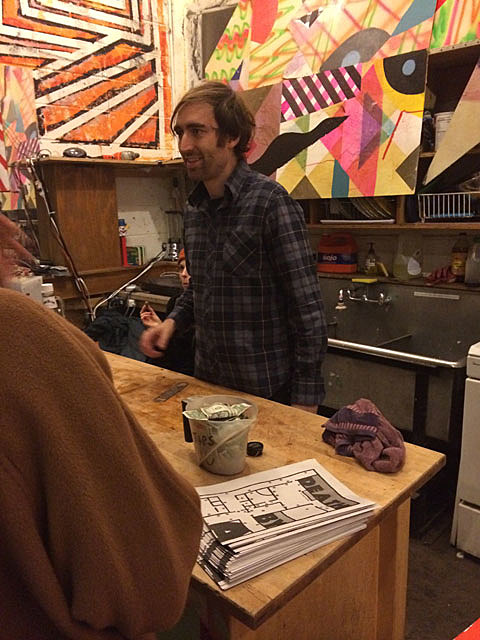 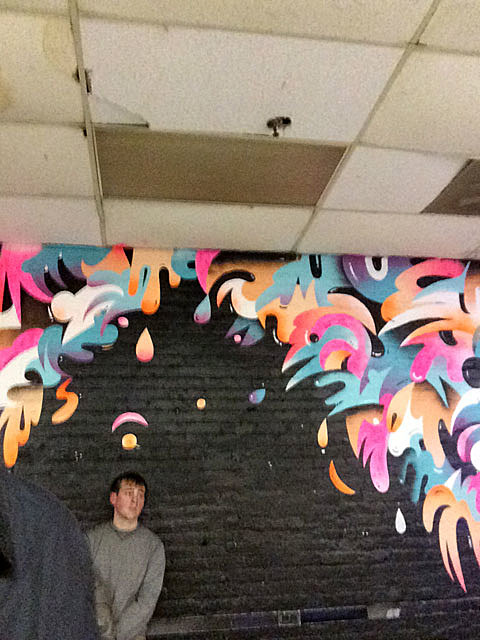 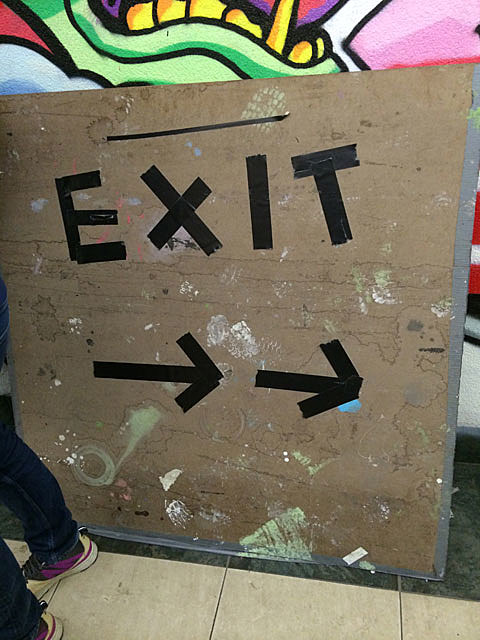 Less than a week left to pick up one of these. #deathbyaudio #ripdba