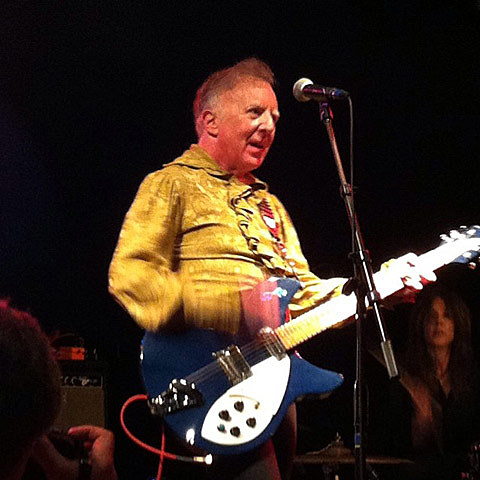 We have it pretty good here in NYC, with pretty much every band you ever want to see traveling through the five boroughs for a show or two. But right now I'm very envious of folks in Carrboro, NC who got to go see a reformed Let's Active play their first show in nearly 25 years at the Cat's Cradle last weekend (8/9). Led by the great Mitch Easter (who produced the first couple R.E.M. albums), the band were much loved by college radio and folks of good taste, with endearing/enduring singles like "Every Word Means No," "Waters Part," and "Fell." Mitch has played Let's Active songs on solo dates but he reactivated the name to play this benefit for the Be Loud Sophie Foundation which supports young and adolescent cancer patients.

Game Theory bassist Suzi Ziegler filled in for original member Faye Hunter (who died last year) but original drummer Sara Romweber was back behind the kit and the Cat's Cradle crowd was clearly loving every minute of their 11-song set. Mitch, if you want to bring Let's Active to NYC, I wouldn't say no. And if they never play again, at least there's video of the Cat's Cradle show, shot by Larry Tucker, to watch.

If you're unfamiliar with Let's Active, dig into their catalog via Rdio. Video from the Cat's Cradle show and the setlist, is below...

Let's Active - Every Word Means No