DOWNLOAD: Let's Wrestle - We Are the Men You Will Grow to Love Soon (MP3) 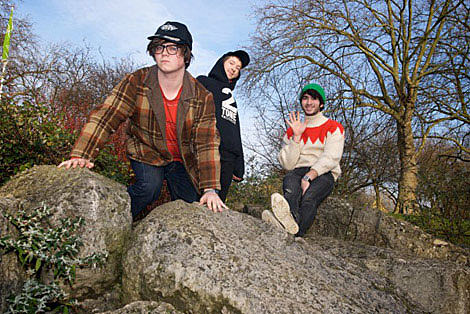 SXSW is almost exactly a month away and BrooklynVegan is going to be very active there, throwing more than a couple parties (official and unofficial) which we'll be telling you more about as it gets closer to the actual festival. Despite what music blogs lead you to believe (and the mass of people that will be there), not everybody goes to Austin in March. With that in mind, we're trying to bring a little SXSW to NYC this year by throwing a pre-Festival party on March 15 at the Knitting Factory in Brooklyn with three (possibly four) bands on their way to Austin: Let's Wrestle, Casiokids, and The Wave Pictures. Stay tuned for one more band TBA. Tickets are only $8 and on sale now.

Let's Wrestle have just signed to Merge, who will be putting out their great debut album, In the Court of Wrestling Let's, on March 23. (The import made my Best of 2009 list.) You can download a track from it at the top of this post. Maybe you caught one of their CMJ shows back in October -- they're a lot of fun. In addition to our show and SXSW, Let's Wrestle will be on tour with Quasi in April -- including a 4/22 stop at Bowery Ballroom (tickets). All tour dates below...

Let's Wrestle - We Are the Men You'll Grow to Love Soon