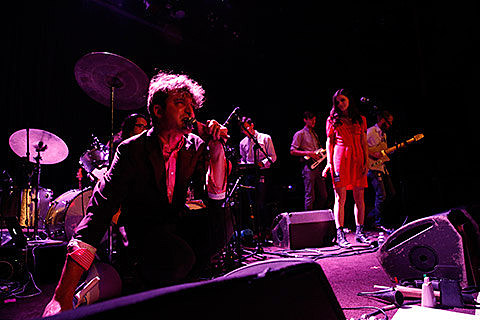 Leverage Models released their self-titled debut today via Hometapes. If you dug the band's "Cooperative Extensions" single (which kicks off the LP) chances are you'll be down with the rest of it that owes much to that early-'80s era when postpunks decided they could change the world by going pop. (I'm talking ABC, Spandau Ballet, The Associates... there's some Talking Heads in there too.) You can stream "Sweep" that features Sharon Van Etten below, and listen to the whole album via Spotify and Rdio.

Live, the band do a good job of bringing the record's widescreen ambitions to life, complete with a percussionist on syn-toms, a saxophonist and singer Shannon Fields who is not afraid to go all-in on the frontman role. You can see it for yourself this week when Leverage Models play a record release show at Glasslands on Thursday (10/3). Maria Minerva, Beca (replacing Butterclock who was originally supposed to play) and Tippy Toes. Tickets for that show are on sale now.

You've got a couple more opportunities to catch Leverage Models in NYC: they'll open for Tunde Adebimpe's (of TVOTR) Higgins Waterproof Black Magic Band at Union Pool on October 13, and then they'll play Mercury Lounge on November 1. Tickets for Mercury Lounge go on sale Friday (10/4) at noon with an AmEx presale starting Wednesday (10/2) at noon. The band will also be playing CMJ shows (none announced yet) so keep an eye out.