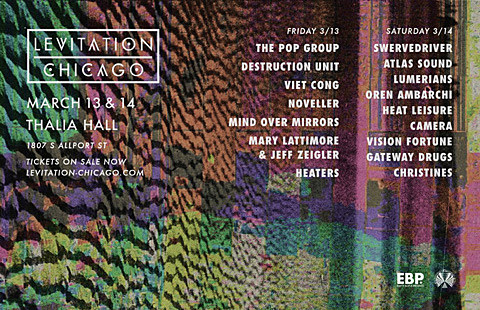 In addition to Austin Psych Fest's Levitation Festival in Austin, they're doing another US fest: Levitation Chicago, which happens this weekend (3/13-14) with The Pop Group, Destruction Unit, Viet Cong, Swervedriver, Atlas Sound and more.

Ahead of this weekend's festival, psych rock producer Al Lover made another of his mixtapes for the fest. It includes songs by all the artists on the lineup, as well as his redux of Lumerians' "Hook For An Eye," exclusive to this mix. The mix premieres in this post and can be streamed below.

There are also Levitation festivals in France and Vancouver, the latter of which just announced its lineup. APF is also putting on two SXSW shows with help from Sailor Jerry. Lineups and more info for those, below. 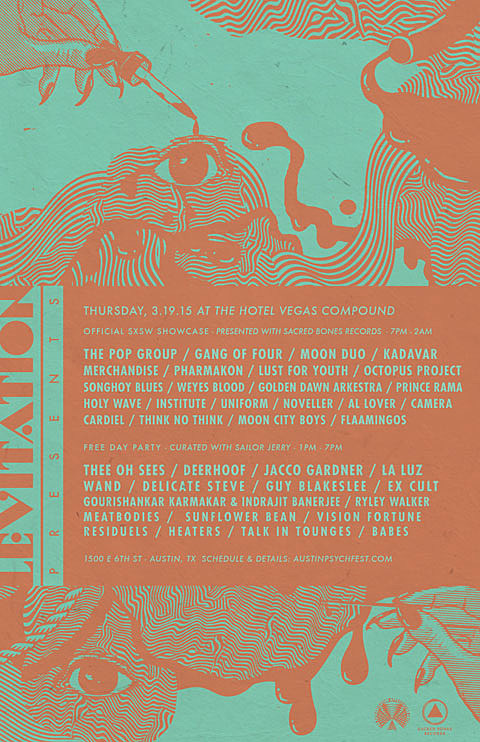 OFFICIAL SXSW SHOWCASE - PRESENTED WITH Sacred Bones Records - 7pm - 2am
We're proud to be working with one of our favorite record labels in the world to host this official showcase.
The Pop Group • Gang Of Four Official • Moon Duo • KADAVAR • The Octopus Project • Merchandise • Pharmakon • Songhoy Blues • Weyes Blood • Golden Dawn Arkestra • Prince Rama • Holy Wave • Lust For Youth (Official) • INSTITUTE • UNIFORM • Noveller • Al Lover • Camera •CardielL • Think No Think • MOON CITY BOYS • FLAAMINGOS
This is an official SXSW showcase but if you show up early you may be able to get in with a small fee at the door, if space allows. Last year was $5, so it should be something similar. RSVP