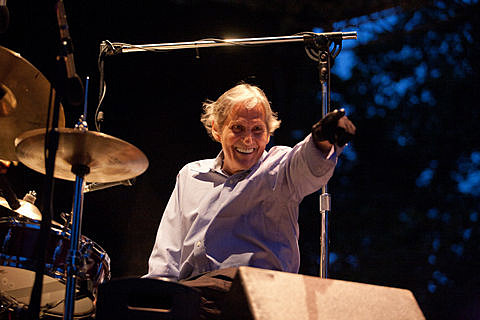 The Band's Levon Helm will step outside of his weekly Midnight Ramble for a show at Wellmont Theatre on February 10th with Peter Wolf. Tickets are currently on AMEX presale and go on regular sale Friday 11/18 at noon. The show, along with a pair of dates that he has lined up at Ulster Performing Arts Center in Kingston, NY (11/18 and 5/25) are his only non-Midnight Ramble dates announced thus far. Full tour schedule is below.

Meanwhile, the Midnight Ramble continues this weekend with special guest Hook Herrera and on 12/3 Helm will welcome Jimmy Vivino (of Conan's Basic Cable band) and Dawes. Tickets for that show, and all others are still available (either seated or Standing Room Only).

Dawes will also head down to NYC & NJ that same week. Both Maxwell's shows, which Robert Ellis is opening, are now sold out though. You can catch Robert Ellis though during a tour with John Doe that hits City Winery on December 4th. For the X man, it's one of many gigs that will be keeping him busy through New Year's Eve.

All Levon and Dawes and Robert Ellis and X dates and a video below...

--
Levon Helm Ramble At The Ryman "Ophelia" on PBS