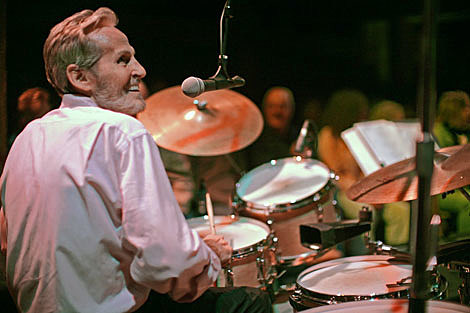 The gradual return of Levon Helm to singing and performing since undergoing throat cancer surgery in 1998 had a tremendous payoff Sunday night (8/15) at the Greek Theater, where the Band's drummer and Southern spirit responded to an admiring crowd with a dazzling two-hour concert.

Helm's presence -- at 70, he's still a ferocious drummer -- was cheered as much as the top-notch music-making; this show was a celebration of a creative life, of multiple strains of American music and of one man's determined will to soldier through adversity.

Sunday's show at the Greek [in Los Angeles] is the farthest west Helm and his 10-piece band band, led by guitarist Larry Campbell, have traveled since Helm returned to performing a little more than six years ago. In early 2004, he converted his Woodstock, NY, barn into a concert venue for the so-called "Midnight Ramble," asking, essentially, for fans to come to him, where they would be treated to an informal musical gathering with his band and esteemed guests. -[Soundspike]

The above review comes from a Levon Helm Band appearance in LA in August (not long after Levon played Radio City Music Hall with Willie Nelson). The former member of The Band will return to NYC for two dates sectioned at Beacon Theater in November. They'll be joined by special guests Steve Earle (on 11/26) and Bettye Lavette (on 11/27). Tickets for the Thanksgiving weekend shows are currently on AMEX presale (11/26 here and 11/27 here), and go on regular sale at noon on Friday (9/17).

Those in the mood for a road trip can head to Woodstock to check out Levon Helm at one of his Midnight Ramble sessions. Taking place fairly often (sometimes weekly), the space will also host Steve Earle (10/9, 10/23) and My Morning Jacket (10/16, before they play Terminal Five x5) in the coming months.

Full tour dates and some vids of the man at Midnight Ramble are below...

Greezy Wheels, Billy Bob and the Box Masters, and The Band at Levon Helms Midnight Ramble in Woodstock 8/23/08