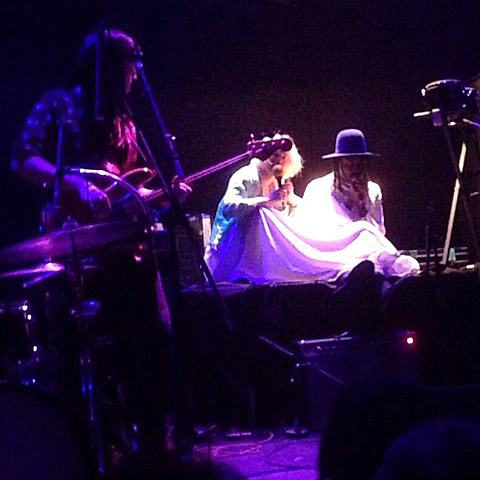 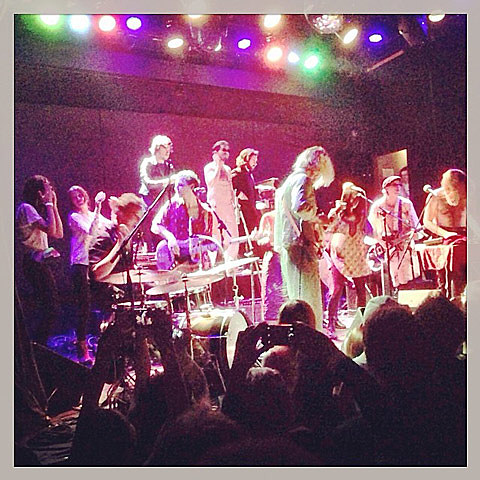 By the end of Connan Mockasin's set at Bowery Ballroom last night (5/1), during an extended version of "Forever Dolphin Love," there were maybe upwards of 20 people on stage, including fellow kiwi Liam Finn on bongos, Blood Orange's Dev Hynes on guitar, Kirin J Callinan and his band, plus about seven girls pulled from the audience. At one point Kirin tossed Liam his guitar with which he played a solo and then tossed it back down to Kirin. It was a crazy love-in of a night that threatened to derail at any second but never quite did.

Connan, in a flowered silk suit that looked like it was bought from someone's aunt, started his set in the middle crowd, on the floor. After a mid-show intermission, he appeared from under a sheet with Dev to do Caramel slow jam "I Wanna Roll With You." Finn, who had Connan play a few of his Brooklyn "murmuration" shows, came out a few times throughout the show with some of his band. Like his music, it was loose and wobbly, but Connan's band (who were also dressed mostly like someone's aunt) is lithe and adept and can really make this stuff work. Plus, Connan's a kooky charmer which is what you need to pull off these sort of shenanigans. It wasn't all nuttiness. Connan played pretty much everything you'd want to hear, leaning a little more heavy on 2010's Please Turn Me Into The Snat than the new more R&B-flavored Caramel, though songs from the latter definitely come alive more than on the too-slick studio recordings. A very fun show. 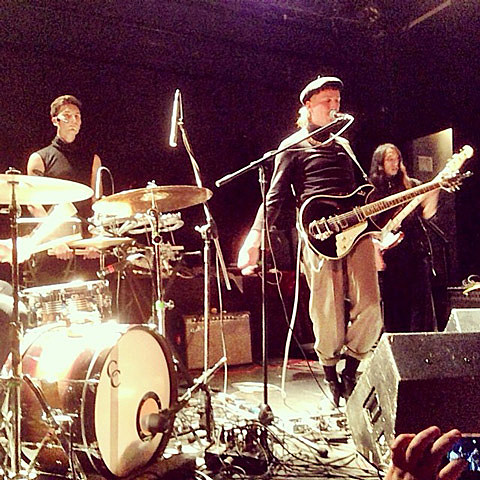 This was the first time I'd seen Kirin J Callinan with a full band, including two drummers. The Australian artist's electro-goth material is a little more distinctive to these ears than his guitar-driven songs, but like Connan (though in a completely different way), Kirin's a genuine weirdo who couldn't be normal if he tried. And, thankfully, he's not trying.

Connan and Kirin do it again tonight (5/2) at Music Hall of Williamsburg, the third night of their North American tour. Liam Finn will be joining Connan again tonight, though probably not Dev as he's part of the Atomic Bomb! A Tribute to William Onyeabor at BAM. But you never know what might happen. Tickets are still available but if you'd like to go for free, we're giving a pair away. Details below.

======================
For a chance at winning a pair of tickets to see CONNAN MOCKASIN & KIRIN J CALLINAN AT MHOW: either tweet something that includes both @BrooklynVegan AND "Connan & Kirin" in the tweet, or send an email to BVCONTESTS@HOTMAIL.COM with the subject line "Connan & Kirin". Include your first and last name in the email. We'll pick a winner at random and contact them with more details. If you enter by email, it will not be shared with anyone else. Good luck!
======================