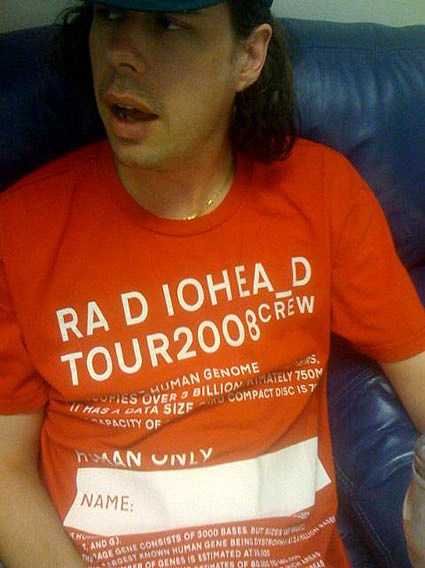 In a world full of fear and ripe with insincerity its such a relief to have met Radiohead.
They are purveyors of truth, beauty and a moral responsibility to the planet.
We've been welcomed with literal open ams and thoroughly schooled on how to function as a band -not just musically, but ethicly too.
The honor is in learning from the best and from the beginning we've been in class.
The important thing for us to make clear is just how awe inspiring this production is.
We're not sure if there's any information made public about the efforts Radiohead go to to reduce their environmental impact.
But, there should be.
At the outset we were all given tour water flasks.
Plastic anything is like contraband.
Every bus and truck runs on bio-fuel.
There is no idling, rather some new-fangled way to deliver electricity cleanly.
They don't do air-freight either.
The list goes on..
Everything is supremely managed to reduce the 'footprint'
and it's inspiring in that its 'real' and should set the standard for other big productions.
This all goes beyond the immediate impact of simply
being able to watch these 5 guys perform together each night.
Unlike any band we've seen they all contribute such an immense amount to the outcome. Their extreme individual talents blending so naturally.
To witness this first-hand is an education in musicianship and vision that's certainly not been lost on us..
For now, we'd like to send our huge thanks to the Radiohead crew for being so super crazy nice and supportive to us.
We'll see them in Spain again for the Daydream Festival and of course during our West Coast tour with Radiohead in August -
so no tears yet..
We Liars head to Europe now...
following a luxurious 2 day break and will be re-tracing some of the steps missed due to the euphoria of living in rainbows.