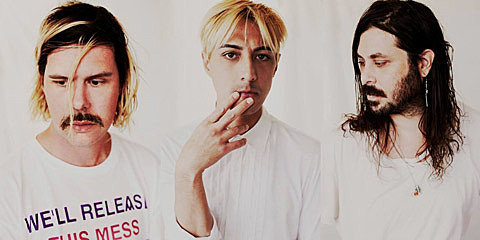 The new single from Liars' excellent album Mess is "Pro Anti Anti" which, in the opening seconds, sounds like it's going to be some '90s house jam until the distorted synths come crashing through the wall like Kool-Aid Man. One of the remixes for the song is by Manchester's Factory Floor (who were just in NYC) who pull the stems apart and rebuild the song in their own acid image. Stream it (via The Quietus) below.

Liars are at Austin Psych Fest this weekend and then will be in NYC for two shows: Le Poisson Rouge on May 8 and The Wick on May 9. Lower Dens' Jana Hunter opens and tickets to both LPR and The Wick are still available.

More shows have been added to Liars' tour schedule and all dates are listed, along with the remix and original version of "Pro Anti Anti, below...