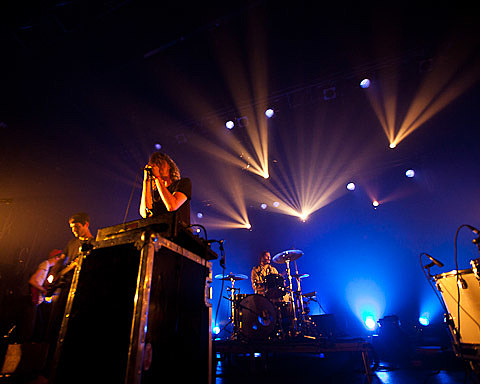 Liars are set to release their new album, WIXIW (pronounced "wish you") on June 5 via Mute, and they're now streaming the entire album a week ahead of its release date. In his NPR review, Otis Hart wrote:

WIXIW, out June 5, may just be the best Radiohead album since Kid A. In all seriousness, when you listen to the new Liars album -- as you should many times over the next week -- imagine Thom Yorke's falsetto taking the place of Angus Andrews' less distinctive but no less effective voice amid the barrage of intricate electronics. At times, it's almost as if Andrews is rubbing it in Yorke's face, like in "Ill Valley Prodigies" or the title track. These are the sort of songs disappointed Radiohead fans wanted on The King of Limbs.

I can't help but agree entirely with the Radiohead comparisons (especially on "His and Mine Sensations") to the point where it's almost a little too obvious, but the album is nonetheless a solid listen. Check it out for yourself below.

As mentioned, Liars will be playing some shows in support of the release including a NYC show at Webster Hall on June 20. It's since been announced that Oneohtrix Point Never (aka Daniel Lopatin) will open that show. Tickets are still available and we're also giving away three pairs. Contest details below.

The Webster Hall show is one of three currently scheduled NYC appearances for Oneohtrix Point Never on his live itinerary this summer. The others include previously discussed performances at Ecstatic Summer at World Financial Center (7/14) and Yo Eskerikk Asko NYC! at Public Assembly (8/25). A list of all Oneohtrix Point Never dates, along with the album stream and contest details below...

--
For a chance at winning tickets to Liars and Oneohtrix Point Never at Webster Hall: either tweet something that includes both @BrooklynVegan AND "LIARS" in the tweet, or send an email to BVCONTESTS@HOTMAIL.COM with the subject line "LIARS". Include your first and last name in the email. We'll pick a winner at random and contact them with more details. If you enter by email, it will not be shared with anyone else. Good luck!