Life of Agony played their first of "two intimate shows in Brooklyn" at Saint Vitus last night (4/18). Though there was a nice selection from River Runs Red and other set staples from throughout their career, they did -- as promised -- dive deep into their catalog to perform some songs rarely heard live. From River Runs Red to Ugly to Soul Searching Sun to Broken Valley, to the new A Place Where There's No More Pain, we got a taste of it all. Check out the full setlist AND VIDEO OF THE ENTIRE SHOW, below. As you can hear, Mina Caputo was in a great mood, and even suggested from stage that maybe next year they can do five nights!

Photos from the gig are in the gallery above, new merch included. The show was opened by old LOA friends, NY sludge core band Borgo Pass (whose drummer was wearing a Sleep shirt; he's probably pretty psyched right now). The Pain Method opens at the same venue tonight (4/19).

Both Vitus shows are/were sold out, but tickets are still available for LOA's next home city show which is also a pretty intimate affair at Bowery Ballroom on September 29, part of a much bigger "Rise of the Underground" tour with Type O offshoot Silvertomb.

Silvertomb is the new band of Kenny Hickey and Johnny Kelly of Type O Negative, which means that one Type O drummer will still be joining LOA on tour even though original Type O drummer Sal Abruscato (who just announced a new Pale Horse Named Death album) is no longer a member of LOA. In fact, the Vitus show was the live debut of LOA's new lineup with Veronica Bellino on drums (welcome, Veronica!). P.S. if you want to see 2 Type O drummers at the same show, Johnny is actually also drumming for Sal.

Speaking of Type O Negative, Joey Z did take a second at the show to acknowledge that the anniversary of Peter Steele's death just passed...

I don't think any of us would be here if it wasn't for fucking Peter Steele. I remember Alan showing me songs to River Runs Red and then we would stop playing them and just listen to Carnivore in his basement. And then we'd go see Pete at L'Amour and fucking tear that place up..... just like you're going to tear this up right now...

The "Alan" in question is if course LOA bassist and artist Alan Robert, who by the way just announced a new DELUXE horror coloring book.

Saint Vitus video and setlist below: 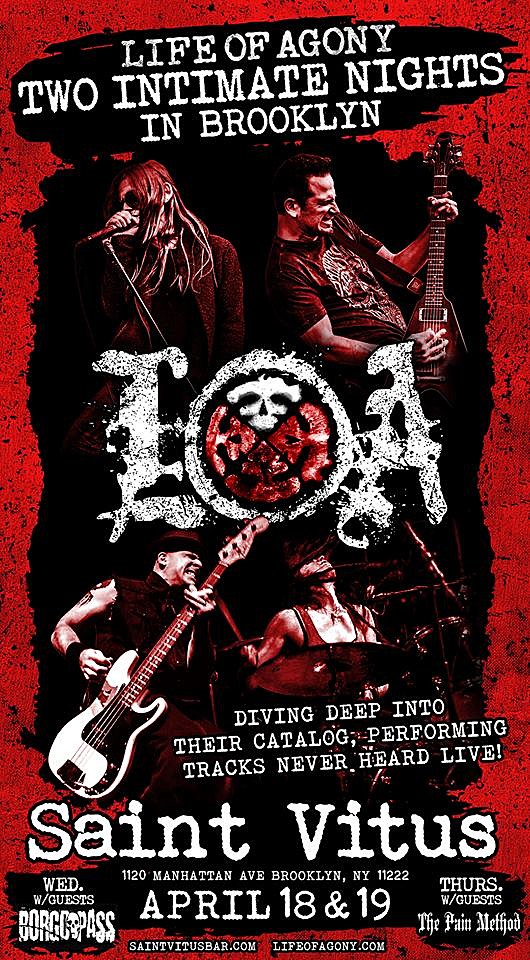