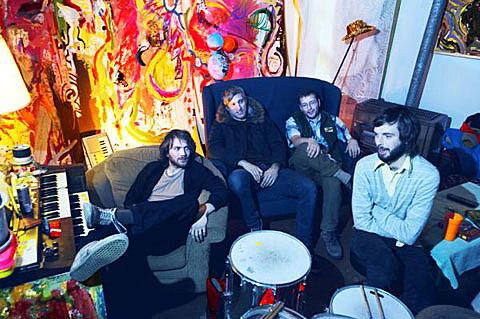 As mentioned previously, Montreal dance-pop band Think About Life play Mercury Lounge tonight, two days after playing an early set at the WBAR-B-Q on Sunday. Tickets are still on sale for that. It's a late show. The early show at the same venue features Casiotone For The Painfully Alone.

Opening the late show are Chicago's Light Pollution, who play a kind of synthy post-rock and whose debut LP, Apparitions, comes out June 8th on Carpark Records. That album's first single, "Good Feelings," a mid-tempo jam with appegiated synths under cymbal crashes and mountain-top vocals, is above. Its video is below.

Light Pollution have a few more shows this week too. They play Glasslands on Friday with electronica-pop bands of varying degrees: Keepaway, Memoryhouse, Tanlines and Psychobuildings. Saturday Light Pollution was scheduled to play at the still-closed Market Hotel - according to the band's Myspace, that show has been moved to Under 100, the sometimes-open venue that hosted Erykah Badu about a month ago.

Tanlines recently received a video for their song "Reinfo" from a fan, in the form of a video love letter/tour of the East Village. The band writes: "This guy who does a blog called Pitchfork Reviews Reviews randomly emailed us this video that he made for a girl named Anna. We like it, so now it's our official video!"

That, and a Light Pollution video and tour dates are below...