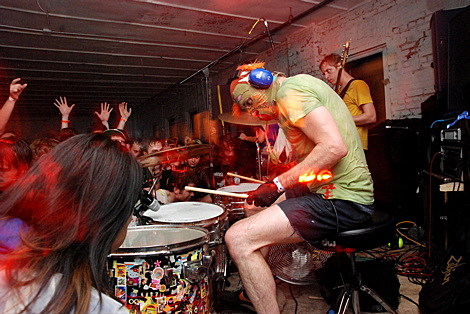 Spazzy noise-rock gods Lightning Bolt have always had a knack for playing in any venue, no matter how odd, like "Above The Auto Parts Store" (where the pic above comes from), or abandoned lots/Bushwick lofts, and recently an upscale bowling alley (after the show got moved from a public park). Now the Providence duo will hit the road for a string of US dates in late March that not only includes Coachella, but will keep that streak alive in NYC by including a stops at the defunct (?) Club Exit in Greenpoint on April 27th followed by a show at the somewhat swanky Le Poisson Rouge on April 28th (Tickets go on sale February 18).

The above MP3 is from their 2009 album, Earthly Delights. All tour dates and some videos below...