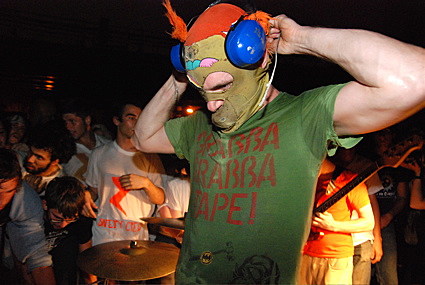 Jacket Copy: Do you feel the concept of the "record review" is still relevant? Was it ever?

Henry Owings: I've always felt that the more constraints that are put on writers, the less compelling the writing will be. For instance, I wrote for the NME for a nanosecond and was forced to write record reviews of bands like Lightning Bolt and Hot Snakes in less than 100 words. I mean that's like cramming an elephant into a phone booth. But are record reviews relevant? I don't know. I still purchase records the same way I did when I was 16 -- which is to say it's done entirely by word of mouth. I've always considered record reviews to be suspect, but if you need to read them, just read the last sentence because that's the essence of what the writer is trying to convey. Try it sometime, it's a great trick. Trust me. ["The Precarious State of Music Criticism," LA Times]

Lightning Bolt will be returning to the Broadway Backyard, where they played last September, for an afternoon show on Sunday, August 30th (though the venue is listed as "tentative" by Todd P). In that same week, the band will also be performing in Philly and at L.A.'s FYF Fest.

On Octoer 13th, the Providence duo will be releasing the follow-up to 2005's Hypermagic Mountain, Earthly Delights, on Load Records. The label writes that the new disc comes after "scrapping two entire full lengths." Check out the album art and tracklist from that record, with the band's full tour dates, below...