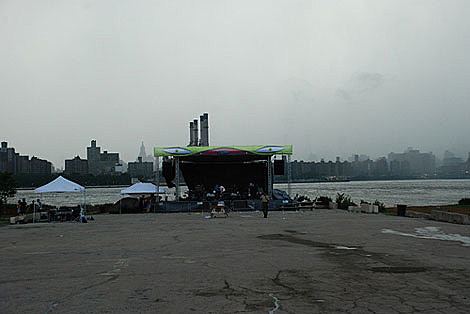 Trail of Dead never got a chance to play the Pool Party at the Williamsburg Waterfront on Sunday. Grupo Fantasma, HEALTH, and Black Lips did get to perform before they called it for lightning though. More pictures soon. In the meantime, I posted seven other sets of photos on Sunday (still not caught up either), and then there's the pretty pics from the sunny South Street Seaport show on Friday, and Thursday's Ted Leo show where bands were also cut due to the weather.

If you were looking forward to Trail of Dead, don't worry, they play the NYC-area three more times between now and September 19th (though not for free). The first chance to see them again is this very Saturday at All Points West. They go on at 1:50 PM.

This coming Sunday's Pool Party at Williamsburg Waterfront is the one with Dan Deacon, Deerhunter, and No Age (playing in the round). It's unfortunate that it conflicts with All Points West.

What did you do this weekend?

Nardwuar posted a video interview with Little Boots. Below...