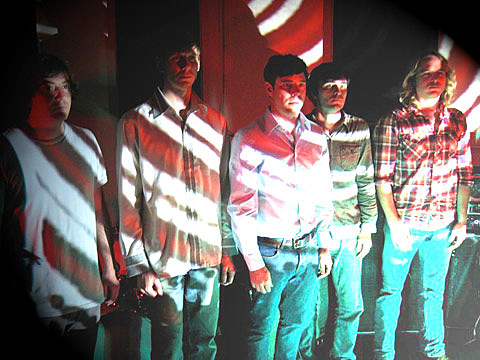 Not unlike Foreign Born, the echoes of '80s-era KROQ are all over the band's tuneful debut, Here Comes the Ocean, which is out now digitally in all the usual places and on vinyl/cassette via their website. Echo & the Bunnymen is the comparison they get most often and it's hard to deny, especially on the LP's midtempo closing tracks "She Comes Walking Down Slowly" and "It Never Stops" which coulda come straight off 1987's 'grey album.' The rest of the album is more energetic and not quite as influence-specific, but it's very Velvet Underground '80s sonic diaspora if you get my drift. The whole record's pretty catchy stuff, and you can download "Red Flashing Lights" which reminds me a little of Sweden's Mary Onettes.

Tonight's Knitting Factory show is part of a wine event called Summer of Reisling that also has the Black Hollies, Nouvellas and Himalaya on the bill. $30 gets you into show and four glasses of this particular varietal, seven of which are on offer (it's very similar to the new Vivo in Vino that Holly Miranda is playing coming up). If you just want to see the bands at Knitting Factory, it's $15.

The Cake Shop and Union Hall shows both feature New Mexico (formerly Apes of Wrath) and the Cake Shop show is headlined by synth-rockers Kordan.

All Lights On tour dates after the jump...