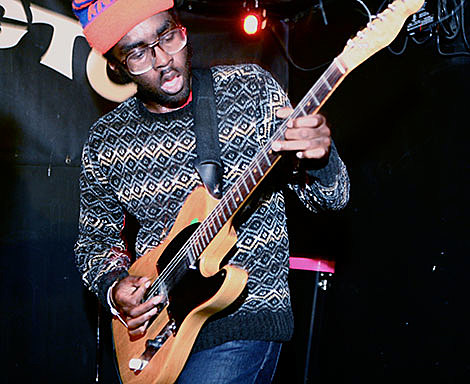 Lightspeed Champion is playing the Mercury Lounge in NYC on Thursday, June 18th. No ticket info yet.

The Champion himself, Devonte Hynes, laid a huge update on his website/blog last night, with details on his three unique, upcoming UK dates and new book and album(s) info. All of that below...

At the first of his trio of one-off performances, Lightspeed Champion will cover the original Harold and Maude soundtrack, originally by Cat Stevens, at a live screening of the movie on April 24th at the BFI in London.

I have been preparing for a show at the British Film Institute that takes place on April 24th. In this show I shall be performing the HAROLD AND MAUDE soundtrack as written by Cat Stevens after a screening of the great Hal Ashby movie. This has proven slightly difficult to prepare for, and completely terrifying, But, I think it should be fun, so come down if you are in London, I will also play a few new songs as well.

Tickets for that are on sale now.

Then, Lightspeed Champion visits the Great Escape Festival in Brighton, UK, on May 14th-16th, to curate part of the three-day fest and perform.

I've been working on shows for The Great Escape festival in Brighton which i'm curating three days for, and performing a special show on the second day of the event.. the date is on the myspace, and i'll let you know the bands i've chosen to perform as soon as all is confirmed.

Tickets for that are on sale as well.

Finally, Hynes performs at a tribute to composer/street musician/New Yorker Moondog on Saturday, May 30th at London's Barbican.

I've been psyching myself up for vocal duties at The Barbican in Honor of the great composer MOONDOG on the 30th MAY. I really could write about MOONDOG "The Viking Of 6th Avenue" all day, so instead i'll just recommend you to buy the fabulous authorized biography written about the blind musician, real name Louis Thomas Hardin written by Robert Scotto, and featuring a preface by Philip Glass who was a good friend to the late Louis Hardin.

At The Barbican concert i'm taking part in, I've been asked to sing a selection of songs from the album "Sax Pax For A Sax" with the London Saxaphonic Orchestra and pianist Liam Noble, of whom MOONDOG recorded the original album with.

There is a whole host of other things happening at this event also, I strongly urge everyone to come down to this, it is truly a one off and should be phenomenal to say the least, i'd be there in a second even if I wasn't asked to sing.. jesus, such an honour!!!

To say I am shitting myself with fright and excitement is a slight understatement.

Tickets for that are on sale.

Well, since this last blog post I am now officially a published Author. Strange, I know..but yes, you folks in the u.k can purchase my first story, which is a short Entitled "The KKK Took My Baby Away" which is featured in the PUNK FICTION book which has been released to raise money for Teenage Cancer Trust.

My story is that of a first person sci-fi monologue, a psychiatric analysis of a lone man who's only child has been kidnapped by an Alien Race, and takes place entirely in a space pod as he race towards uncertainty and complete and utter discontent. The story also comes with a fantastic illustration provided by the ever talented Ferry Gouw.

I guess I finished recording the new album, kind of.. it's in the mixing stages now, and just finishing off the three songs I collaborating on with a musical idol of mine!!!!! I can't wait for people to hear it !!!

I spent last weekend in Atlantic City with my good friend David Swanson, who was the singer in the band Whirlwind Heat (of whom I recorded the first lightspeed e.p with, entitled, wait for it...Lightspeed Heat! ).. who is now Terry Richardson's assistant and a talented photographer in his own right.

We drove down to Atlantic City, and stayed up all night taking promo shots, filming promo bits and having an awesomely bromantic time soundtracked by the best band in the world PHOENIX. Maybe I should write a separate blog about Atlantic City.. i'm pretty sure it's the most fucked up place i've ever been...

Also, I should inform everyone, that i've just started on ANOTHER album to hopefully be released not too long after this next Lightspeed record.