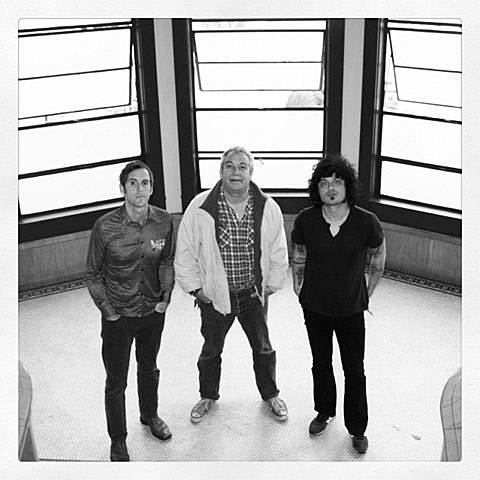 Anywhere began as a LA/SF collaborative project started by musicians Christian Eric Beaulieu (Triclops!) and Cedric Bixler Zavala. In early 2010 while in Los Angeles to perform at an art opening of mutual friend artist Sonny Kay, [Beaulieu] befriended Cedric (singer of The Mars Volta) who was DJing the event. The two exchanged numbers and... months later the pair met in Los Angeles, enlisted the mobile engineering talent of Toshi Kasai (Big Business) and tracked an album's worth of material in 2 days at The Melvins practice space in downtown Los Angeles. During that same visit Christian played live on "The Watt from Pedro Show" as the musical guest of Mike Watt (of The Stooges, fIREHOSE, Minutemen). After the show, before leaving San Pedro, Christian realized they needed bass on the new material, and boldly asked Watt if he'd contribute. Watt agreed immediately, and a few months later delivered the entire projects bass tracks. Returning to San Francisco, Christian decided to reach out to vocalist Rachel Fannan, who had recently parted ways with Bay Area psych rockers Sleepy Sun and had relocated to Los Angeles.

Anywhere are welcoming a new single, their second, via Valley King Records, a limited-to-500 pressing of 7"s featuring artwork by Alan Forbes. Preorder your copy at Valley King.

One of Mike Watt's many other projects, Spielgusher, also has an album coming out this month, and he's keeping busy playing shows as usual too. As previously mentioned, Mike is performing Minutemen songs as a duo with George Hurley at an ATP in the UK in March. Before then he also plays with the Missingmen in LA in February, and he's taking part in a memorial for his friend Doug Rockett in Memphis this Friday (1/13).

More importantly... We've already seen the lineup for Coachella 2012, so we know Anywhere WON'T be on hand for the festival (or Mike with the Minutemen), but Coachella WILL feature reunion performances from both fIREHOSE (with Mike Watt - their first show in 8 years) and, as you definitely know by now, At The Drive In (with Cedric Bixler Zavala). No word on any other scheduled fIREHOSE shows at the moment.

Omar Rodriguez-Lopez of ATDI (and Mars Volta) will also do double duty at Coachella. He's also playing the festival as part of Les Butcherettes (like he did at Fun Fun Fun Fest). Check out an NPR Tiny Desk Concert of Le Butcherettes below alongside a Le Butcherettes LP stream.