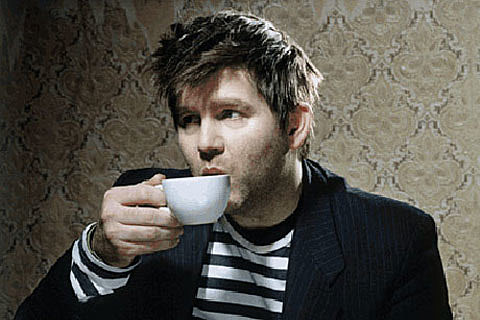 "I make a lot of coffee," James Murphy told NY Mag in an interview after the movie's premiere. "For my birthday, my girlfriend got me a training course with the world champion. That's what I'm going to do when I get back to London."

Yet another one! Joining Wilco, David Lynch, Bonnie 'Prince' Billy, and Starfucker in the coffee business is former LCD Soundsystem frontman James Murphy.

Most recently done by Bonnie 'Prince' Billy with his limited edition "Bonny Billy Blend" from Kona Rose Coffee (available for purchase via Drag City), Murphy is planning on reiterating the trend with his own espresso blend.

According to Murphy himself, he plans to "just go to a roaster who lives near me and just start tweaking beans and temperatures," for the fun of it.

He loves coffee so much, he's releasing the hits, "Never As Tired As When I'm Waking Up (Without Coffee)", "Disco Percolator", and "Bean Connection."

Well, not really, but James is keeping busy in the art world too. The LCD Soundsystem documentary Shut Up and Play the Hits just premiered at the Sundance Film Festival on January 22. Billboard reports:

The film is reminscent of Martin Scorsese's "The Last Waltz" (1978), about rock group The Band's final show, in that it documents an influential group's guest star-laden final live performance and largely focuses on the frontman (in "Waltz's" case, Robbie Robertson). When asked during a post-screening Q&A about trying to best Waltz, Murphy joked: "I was just like, 'that chump Robbie Roberston, I'm gonna take him --'"

Going into the project, Murphy said he was aware of the thematic similarities with "Waltz." "We all talked about it. Knowing that it is there, you can't not deal with it," he said.

In the film, Murphy is often shown "crouched by an espresso machine," depicting his love of coffee, and inspiration for his blend.

The Comedy (Clip) from rick alverson on Vimeo.