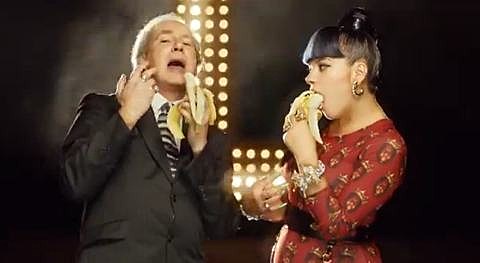 It's been about five years since Lily Allen released her second album, It's Not Me, It's You, and has spent most of the time raising her two daughters, making a little time to guest on Pink and T-Pain tracks. But Allen, best-known for her 2006 debut Alright Still, got back in the game this year. First she covered Keane's "Somewhere Only We Know" for a Christmas ad for upscale UK department store chain John Lewis. (She's no stranger to covering them with "Everybody's Changing" being a constant in her live set in 2006.) But now she's released a proper comeback single, "Hard Out Here" and its flashy, funny video. The rest of that phrase would be "...for a bitch" and the song not-so-gently tweaks (and twerks) sexism in the music industry, all with a tongue-in-cheek uber-autotuned chorus. Welcome back, Lily.

By the way, did you realize Lily's brother Alfie (of the song of the same name) plays Theon Greyjoy on Game of Thrones?

Watch the video (and the John Lewis commercial) below...