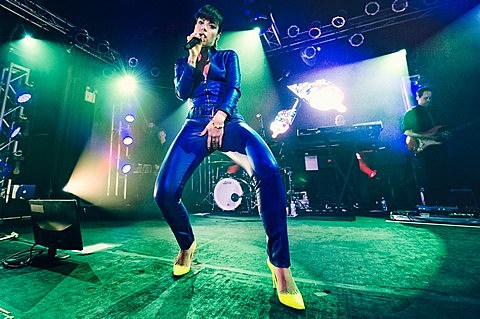 Flaming Lips collaborator and Smiths fan Miley Cyrus is continuing her trend of taking indie-approved pop singers on tour. First it was Sky Ferreira and Icona Pop, and for her next tour she'll take out Sheezus herself, Lily Allen. That tour hits the NYC-area on August 1 at Nassau Coliseum. Tickets for that show are on sale now. All dates are listed below.

Lily also just put out her new video for "URL Badman," which you can watch below.

Meanwhile, Miley was also sampled by Alt-J on "Hunger of the Pine," the first single off their upcoming sophomore album, This Is All Yours (due 9/23 via Canvasback). Her "I'm a female rebel" line from "4X4" is used in the song, as you can hear for yourself by listening below. If you're wondering how Alt-J came to sample Miley, Rolling Stone has some insight:

"It was surreal," laughs keyboard player Gus Unger-Hamilton [in reference to Miley covering "Fitzpleasure" in London], sipping tea outside Alt-J's management office in East London. "We were like, 'It's us!' but her younger fans didn't really know what was going on. It was a long show and that was just a moment in it, like the bit where she put on a check shirt and sang a Bob Dylan cover. The crowd were like, 'What the fuck's this? I'm a 14-year-old girl, I don't know who Bob Dylan is.'"

Nonetheless, the incident ended up influencing Alt-J's second album, This Is All Yours, due September 22nd. After meeting backstage, an unlikely friendship developed, with Alt-J drummer Thom Green remixing one of Cyrus' songs and Cyrus gifting Unger-Hamilton Flaming Lips albums on iTunes. Now, the English alt-rockers have returned the favor on This Is All Yours' hypnotic lead track, "Hunger of the Pine", which samples Cyrus' "4x4." Cyrus herself helped clear the sample with the other writers and publishers involved.

Alt-J's tour hits NYC on 11/16 at Beacon Theatre (sold out but you can get resale tickets from Ticketmaster).

Stream the new Alt-J single, with the new Lily Allen video and list of Miley/Lily dates, below...