"When doors open to Lily Allen's highly-anticipated New York City concert on April 11th, fans will notice a difference....After the show, a collectible poster commemorating the evening will be distributed to concert goers, a tradition that will continue for select shows throughout the year." [a quote of a quote previously on Brooklyn Vegan] 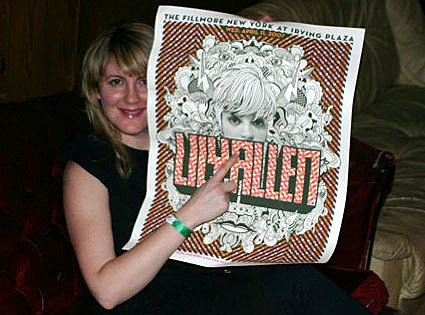 "Nothing's really changed to the Irving Plaza/Fillmore NYC takeover except the ugly sign outside, tons of posters lining the stairs up to the stage and a slightly larger awning VIP area." [thecultureofme]

"the ONLY things that have changed about this newly named venue are the posters on the wall from past Irving Plaza events, some red curtains against the right wall, and a large black and white photo of Bill Graham (who is probably rolling over in his grave, poor thing)." [Shelves of Vinyl]

I also just found out that Lily Allen was supposed to play a private party at Studio B tonight (April 12), but that she cancelled and the Klaxons (who played Bowery last night, and are playing Studio B tomorrow) are taking her spot (meaning they are playing studio B two nights in a row)

Next stop for Lily = Roseland.