MySpace Music the world's premiere online music portal, is excited to announce Lily Allen performing 3 Secret Shows on 3 continents. The British singer will put on intimate concerts for her MySpace fans in New York, Tokyo and London at no charge. Lily will kick off the global Secret Show series with a performance at The Bowery Ballroom in New York City on February 10th. The concert marks the first time a single artist will take part in multiple MySpace Secret Shows on a global level. The New York show, sponsored by TurboTax® Federal Free Edition, signifies Lily's debut concert celebrating the release of her new album, It's Not Me, It's You. Secret Show performances are exclusively for MySpace users who friend the MySpace Secret Shows profile and are then notified of all details via a MySpace bulletin. In addition, beginning February 10th, Lily's new album will be available to purchase for $3.99 for a limited time on her MySpace Music player through Amazon MP3.

The free NYC show also features Trouble Andrew and Matt & Kim on the bill. That is obviously a much better option than the show happening at the much larger Roseland Ballroom in April (that just went on sale). All tour dates HERE. MySpace show flyer below... 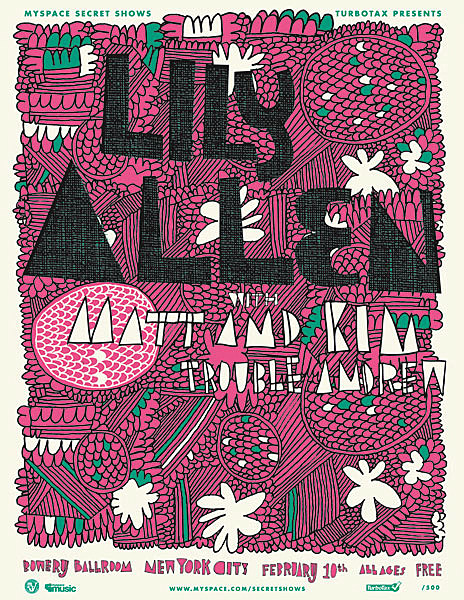