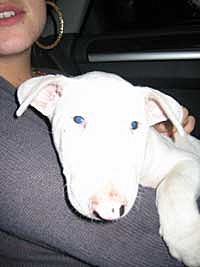 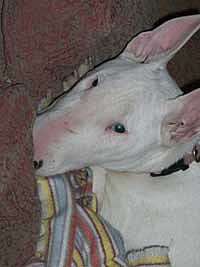 Not only did Lily Allen put out of one my favorite albums in 2006, I was one of those who enjoyed her live performance at Hiro Ballroom back in October. So, I couldn't be more excited at the news I read in the interview between Miss Lily and Mr Thighmaster. Lily says:

Unfortunately, that good news is coupled with some bad news - the dog you see Lily holding in the above picture has gone missing. From her MySpace blog...

I am beside myself with worry because someone has stolen my dog Maggie May this morning.
I am in Jamacia, while i am here Maggie has been looked after by a friend she was stolen out of his van. outside his house, Capel road, Forest gate, London. E7
and no one has seen her since.
Not only am i devastated that my dog has been taken away, but i am also concerned for her wellbeing. She needs an operation on her stomach and is having medical treatment.
there is a reward.
please anyone help.
no one will be angry - me and my family just want Maggie home.