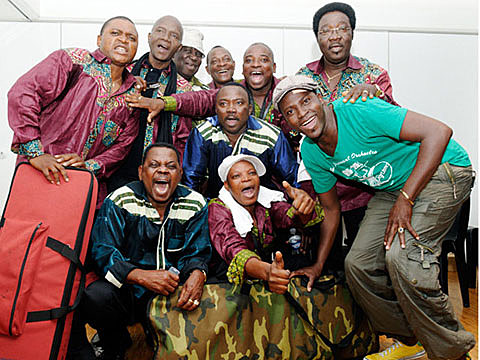 Last September Orchestre Poly-Rythmo de Cotonou played to a packed house at the Barbican Centre in London. There's nothing unusual about a sold-out gig, but what was unusual was that this was Poly-Rythmo's first ever gig in Europe. One thing that may have helped is an extraordinary YouTube video of the band in action in the 1970s, which the Barbican put on its website. And indeed, the Barbican gig was spectacular - angular melodies, punchy horn lines, psychedelic guitar, an injection of funk and insistent, powerful percussion - beaten out on drums, gourds, bells and shakers. It's music you can't ignore. "We are now able to share our music with others," says bandleader Clément Mélomé, "and we ­believe in this adventure."

Poly-Rhythmo are probably the oldest of the post-independence bands in west Africa still active - but only just. The group was founded in Benin by Mélomé in 1968 and became hugely popular in the 1970s. They performed a varied repertoire of Afrobeat, songs based on the vodoun (voodoo) rituals in Benin, Latin music and James Brown-influenced funk. Their success wasn't limited to Benin - the group toured and enjoyed hit records in neighbouring Nigeria, Ghana and French West Africa, while they played alongside some of the continent's greatest stars, including Miriam Makeba, Angelique Kidjo and Fela Kuti. But in the early 1980s, under the Marxist dictatorship of Mathieu Kérékou, Benin entered a period of economic hardship and decline. The band survived, but with precious few engagements, many, even in Benin, thought Poly-Rythmo were history. [Guardian UK]

As heartonastick points out, Orchestre Poly-Rythmo de Cotonou will be make their North American debut on Sunday, July 11th at Gerald W. Lynch Theater at John Jay College (10th Ave at 58th St). The show is part of this year's Lincoln Center Festival (July 7-25). Tickets are on sale.

Another Lincoln Center US premiere will be Serbian band Emir Kusturica & The No Smoking Orchestra who play Wednesday, July 14th at Avery Fisher Hall. Fans of Gogol Bordello take note, Emir Kusturica & The No Smoking Orchestra have a similar "gypsy-punk" sound with prominent violin and other folk instruments. They formed in the late '90s out of political '80s punk group Zabranjeno Pušenje (which translates to No Smoking band) who broke up around the time of the Yugoslav Wars. Tickets are on sale. (And if you enter the ticket code "WMP" when buying one of the $40 tickets to Orchestre Poly-Rythmo, you can get a free ticket to the Emir Kusturica show.)

We've already discussed some of the new music, theater and dance productions that are part of The Lincoln Center Festival this year. One of them is the The Blind Boys of Alabama-curated three-concert series with guests Yo La Tengo, Aaron Neville, Ralph Stanley and Joan Osborne. Another is complete works of Edgard Varèse, with the NY Philharmonic, International Contemporary Ensemble (ICE) and members of So Percussion (who play for free on May 5th), that happens over two nights. Varèse is massively influential 20th century composer whose work with musique concrete and electronic sounds inspired musicians from Zappa and the Beatles to modern rock and electronic bands like the Music Tapes and Matmos.

Also at Lincoln Center this summer are their free Out of Doors Festival and their Midsummer Night Swing Festival, which is also outside but ticketed.

Videos and tour dates (Orchestra Poly-Rythmo will also be in Chicago and Quebec) are below...

Orchestre Poly-Rythmo de Cotonou (U.S. debut)
One hour and 30 minutes; no intermission (approx.)
July 11 at 8 p.m.
Gerald W. Lynch Theater, John Jay College, Tenth Avenue between 58th and 59th Streets
Tickets: $30, 40
Lincoln Center Festival 2010 will present the U.S. debut of the Orchestre Poly-Rythmo de Cotonou, the voodoo/funk sensation from the African nation of Benin that has recently wowed audiences throughout Europe with its afro-infused psychedelia and James Brown-influenced rhythms. The New York Times, describing the band's unique sound, says: "At times the funk turns into hypnosis, and the rest is unstoppable dance music."

The cultural and spiritual richness of traditional Beninese music has had an immense impact on the country's modern sound. Benin is the birthplace of Vodun (also spelled, Vodoun, or, as it is known in the West, Voodoo), a religion which involves the worship of over 250 sacred divinities. The rituals used to pay tribute to these divinities are colored by the complex polyrhythms of Vodun, which are still more or less secret and difficult to decipher for even an accomplished musician.
Orchestre Poly-Rythmo de Cotonou has modernized vibrant traditional rhythms by integrating psychedelic guitar riffs, organ harmonies, funk, and soul. This thrillingly energetic music was given new life in 2008 after being rediscovered by French radio journalist Elodie Maillot, who has helped the group tour internationally, and in 2009 by the Frankfurt-based label Analog Africa, devoted to the rediscovery of Africa's musical repertoire of the 1970s, which has released compilations of dozens of the hundreds of songs the group recorded.

Emir Kusturica and The No Smoking Orchestra (U.S. debut)
One hour and 30 minutes; no intermission (approx.)
July 14 at 8 p.m.
Avery Fisher Hall, 65th Street and Broadway
Tickets: $30, 40, 50
Lincoln Center Festival 2010 will present the U.S. debut of Emir Kusturica and The No Smoking Orchestra, the Serbian rock/punk group that is a major concert draw throughout the world. Playing its own unique blend of rock, folk, gypsy, and world music mixed with political satire and surrealist comedy, Emir Kusturica and The No Smoking Orchestra attracts enthusiastic audiences to its infectious, energetic live performances. Inspired by The Sex Pistols and The Clash, the electrifying group was described as a "rowdy, genre-straddling Balkan gypsy-punk rock ten-piece Orchestra" by Time Out London.
Leading the musically adventurous and politically rebellious group members of The No Smoking Orchestra is award-winning Serbian film director and guitarist Emir Kusturica. The group has contributed music to Kusturica's films, including Black Cat White Cat and Life Is a Miracle, and has been the subject of one of Kusturica's own films: the documentary portrait 8mm Stories.
The No Smoking Orchestra (Zabranjeno Pušenje in Serbo-Croatian) was formed in Sarajevo in 1980 and became the most significant musical expression of "New Primitivism," a cultural resistance movement that began in Yugoslavia at the end of Marshal Tito's reign. While filming his debut feature, Do You Remember Dolly Bell?, in 1981, Emir Kusturica became friends with the band members, and he started playing with them both live and to record an album. After two years of performing in Sarajevo, in 1984 the group recorded its first album, Das ist Walter. When Yugoslavia broke apart in 1991, the musicians separated and the group went on hiatus. Those who lived in Serbia, among them singer-songwriter Nele Karajliæ and violinist Dejan Sparavalo, made a new album, asked Kusturica back, and began performing live again. During the shooting of his film Black Cat, White Cat (1998), Kusturica called Karajliæ regularly to ask him to compose songs for the soundtrack, which began another fruitful collaboration among the band members.
--