My Brightest Diamond @ LPR in 2008 (more by Kyle Dean Reinford) 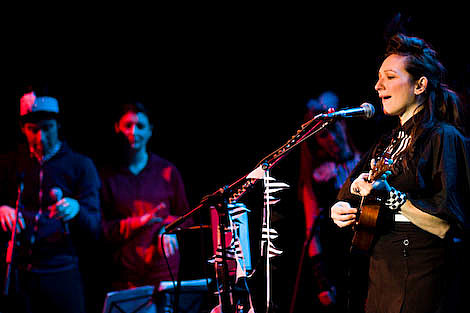 Lincoln Center's acclaimed series American Songbook returns in January for its thirteenth season celebrating the diversity of American popular song. For 16 nights of pop, folk, cabaret, country, rock, and show tunes, the series will explore the best of the golden age of musical standards through to today's most dynamic songwriting. The 2011 season - January 12 through February 20 - will bring to the stage some of today's most gifted interpreters of song, starting with the luminous legend Barbara Cook, the multi-faceted Joan Osborne, as well as the newest toast of Broadway, Kate Baldwin. It will feature opportunities to hear the acclaimed opera star
Pfizer is a proud sponsor of Lincoln Center's American Songbook 2011.

Stephanie Blythe and stage and film actress Anika Noni Rose who make their solo pop concert debuts, and the enduring influence of Latin music in the American Songbook canon will be represented by the modern bossa nova of Bebel Gilberto and the Cuban rhythms of Broadway star Raul Esparza. Arguably the greatest songwriting team in American Songbook history are the brothers George and Ira Gershwin, and they will be the subject of a Rob Fisher tribute with an array of dazzling voices.