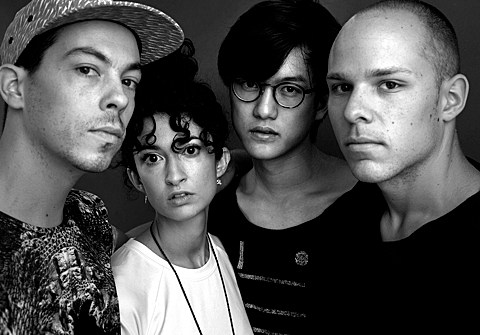 Interpol, who are now successfully free of snowstorm trappage and who made one of Q's favorite LPs of 2014, are set to bring their tour with Hundred Waters to NYC for three sold-out Terminal 5 shows this week, tonight (11/24) through Wednesday (11/26). (They're also on Late Night with Seth Meyers tonight.) As discussed, tonight and Wednesday have Hundred Waters opening but they're not on the Tuesday show. Instead, that show will be opened by NYC's Lip Talk, the band formerly known as Railbird.

Lip Talk, led by the duo of Sarah and Chris Kyle and fleshed out by bassist Derek Leslie (Tiny Hazard, Asobi Seksu) and drummer Ian Chang (Matthew Dear, Body Language), are set to release a new EP in early 2015. We've got the premiere of that EP's shiny synth pop single "Ghost" which you can check out below.

Meanwhile, the night Lip Talk open for Interpol, Hundred Waters headline their own show at Rough Trade (11/25) with a solo set from Mutual Benefit's Jordan Lee (tickets). They also go on a headlining tour in 2015 that brings them back to NYC on 3/5 at MHOW (tickets).