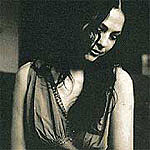 "Singer-songwriter Lisa Germano is the latest addition to the already-impressive roster at Michael Gira's Young God label. Over the last 15 years Germano, formerly the violin and fiddle player for John Mellencamp, has recorded six solo records of intimate, dreamy pop for Capitol, 4AD and, most recently, Ineffable. In 1991 she released her lo-fi debut On The Way Down From The Moon Palace on her own Major Bill label. Signing to Young God, she joins a stable of artists that includes Gira's own bands Swans, Angels Of Light, and Body Lovers, as well as alt-folkers Devandra Banhart and Akron/Family. Germano is now hard at work on her debut album for the label, which will be out in May." [CMJ]