All Pigs Must Die at Union Pool (more by Meghan McInnis) 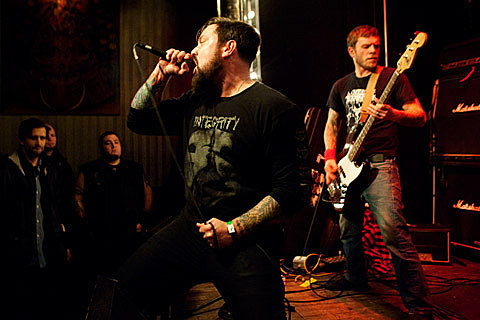 "Vocalist Kevin Baker, noted during the show that this Union Pool gig was their first gig ever which I couldn't believe. I still can't. I even drunkenly asked Kevin after the show if he was serious about that being their first show and he said it most definitely was. First gig or not, the pedigree of these players combined made for a supremely tight, aggressive, and flawless set. The drummer was superior and drove the music at a relentless breakneck pace. Add to that their super heavy bass, guitars, and vocals, and it was a sonic experience that made you want to punch someone." -[Klaus's review of their debut show in January]

I definitely don't condone violence but after seeing All Pigs Must Die live I have to admit it punchng someone could be somewhat justified. Not only have the supergroup-of-sorts (mems Converge, Give Up The Ghost, The Hope Conspiracy, Bloodhorse, The Red Chord) nailed it with their bulldozing live show, but the band's debut EP (recently reissued) also presented a dystopian brand of brooding hardcore destruction. I postulate that any band with Ben Koller (Converge) behind the kit is a good one, but add in the dark riff wizardry of Adam Wentworth, the battering ram low-end of Matt Woods and Kevin Baker's maniacal howl and you have a juggernaut of unfucwitable proportions.

Though their EP is still fresh in our nightmares, All Pigs Must Die is now preparing to unleash God is War, the band's debut long-player and first release with the venerable Southern Lord on 8/16. The eight-track LP is another batch of negative and crusty hardcore punctuated with elements of grind and black metal, including "Pulverization" which makes its debut in this post! Stream that Kurt-Ballou-blessed beatdown for the first time below.

All Pigs Must Die are doing a batch of West Coast dates as part of the traveling festival The Power Of The Riff, which includes names like Noothgrush, Eyehategod, Winter, Pentagram, Trap Them, Masakari (who have a new split LP with...), Alpinist, Seven Sisters of Sleep and many notable others. APMD also has an upcoming and still to be revealed date with Converge on 8/25 in Brooklyn.

--
All Pigs Must Die - "Pulverization"

All Pigs Must Die - God Is War 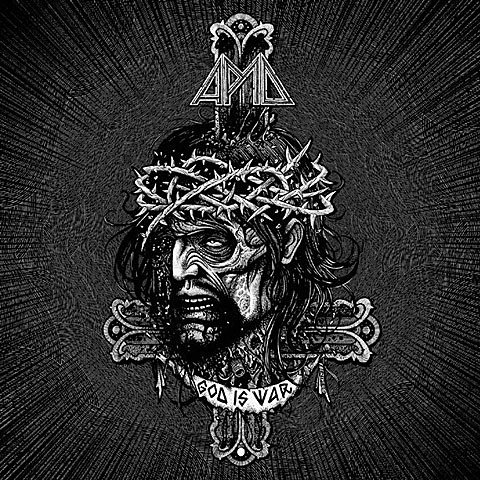