DOWNLOAD: And You Will Know Us By The Trail of Dead - "Weight of the Sun" (MP3) 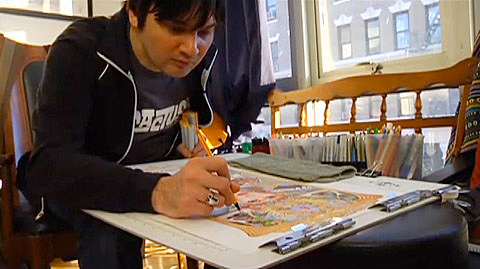 Tao of The Dead is due on February 8th, and as previously discussed ...And You Will Know Us By the Trail of Dead will celebrate with a Record Release show at Littlefield on 2/8, one of THREE NYC dates set for the band in the coming months (the other two are part of their tour with Surfer Blood). Tickets for Littlefield are still available but we also have a pair of tickets you can win. Details are at the bottom of this post.

Also at the bottom of this post is the premiere of a clip from a new documentary by Justin Zimmerman about the art of TOD frontman Conrad Keeley whose art will also be on display at the Littlefield show, and graces the cover of Tao of The Dead.

This post also contains two of Tao of The Dead's twelve tracks - "Summer of All Dead Souls" and "Weight of the Sun" are both streaming below, and you can download one of them for keeps up above.

--
Conrad of Trail of Dead talks about the art of Tao of The Dead & Record Release show, by Justin Zimmerman

=============
To win a pair of tickets to see Trail Of Dead at Littlefield, e-mail BVCONTESTS@HOTMAIL.COM (subject: Trail of Dead). Include your first and last name in the email. A winner will chosen at random and contacted with more details. Good luck!