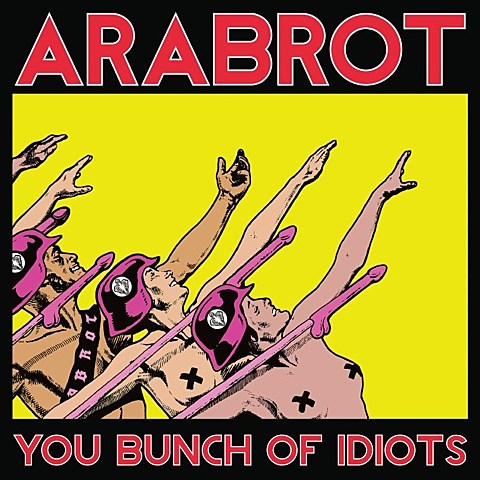 The band, which takes their name from a garbage dump near their hometown of Haugesund, straddle that line quite well, to the detriment of many people who want to listen and enjoy their music but just can't. Well, here's a chance to give that uneasy feeling another try. Årabrot just released the third in a trio of EPs, You Bunch of Idiots via Eolian Empire for the band's first stateside release. This EP, streaming in its entirety below, is six tracks spanning just 19 minutes of hostile weirdness. The recording will be released in Europe as 12-inch vinyl via Fysisk Format.

...Whether you think Årabrot is a triumph of high art from the lowest places or just a noise-rock mistake, (I'm not taking a side because I still haven't decided) there's no doubt that their music is loud, heavy, disturbing, and also entertaining in a creepy insane genius sort of way. Take it for a spin and tell us what you think. [Vanessa Salvia for Invisible Oranges]

Norwegian noise rock band Arabrot are streaming their new EP, You Bunch of Idiots, via Invisible Oranges, where the above quote is also from. It's officially out Tuesday (6/23) via Eolian Empire and Fysick Format. Check out the whole thing below.

Arabrot will be in North America soon for a tour that includes a run with the great Pinkish Black. Since we last spoke, GHOLD were also added to all dates. All three of those bands will hit NYC on July 19 at The Studio at Webster Hall. TIckets are still available.

Full tour schedule, with the EP stream, below...