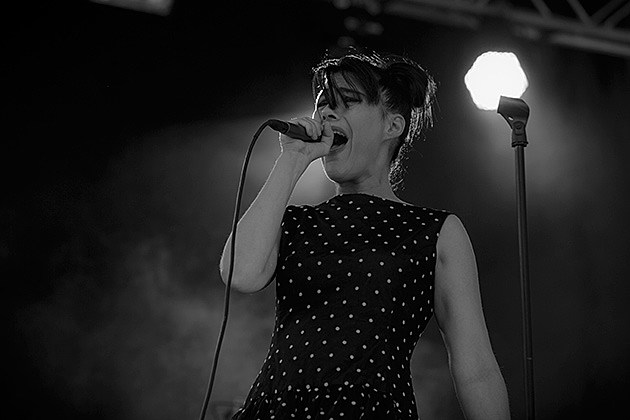 As previously mentioned, Bikini Kill are giving the first-ever vinyl/CD release to their 1991 demo tape, Revolution Girl Style Now, and it comes with three previously unreleased songs. One is the sludgy/grungy "Playground," which you can listen to below. It debuted via Rolling Stone, who also interviewed the band:

I was actually thinking that when I was listening to the new songs -- there's definitely a grungey vibe to them.

[Kathi] Wilcox: Yeah, "Ocean Song" is kind of dirgey. We were definitely listening to the bands that were happening then. I'm sure we were internalizing that to some degree.

[Kathleen] Hanna: That's why I think it was cool to put those on. For me, the more I listened to it, I started remembering that, like, I was also listening to Tad [laughs].

Hanna: Actually, the cassette was recorded primarily... [Nirvana] had all these cassettes, and the record company or whoever was putting it out accidentally put the same songs on both sides, and they couldn't use [the tapes]. And they gave us this bag of used cassettes, so we taped over them, and then we just put a cassette label over it to hide the "Nirvana" bit. If anyone has an original one, they can peel that off and they'll see it. And also you can actually hear, because our music will stop first, and then you can hear the end of "Negative Creep," or whatever.

You can read the rest of the interview here and listen to the song below...