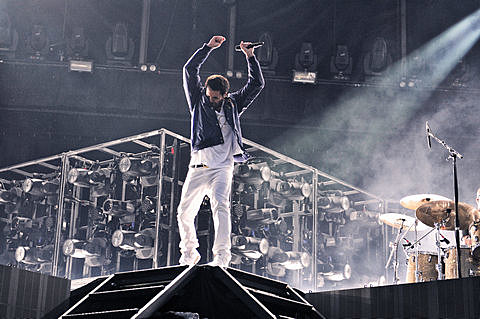 As you may know, Drake has been dropping a handful of tracks ahead of the release of his new album, Nothing Was the Same (due out 9/17), though it's never been exactly clear which of these will actually end up on the album. His newest, "Hold On We're Going Home," sounds like Drake going Marvin going MJ, and it's sounding pretty dope this morning. Check out a radio rip, along with a stream of his other recent single, "All Me" (feat. 2 Chainz and Big Sean), below.

Drake's previously discussed tour with Miguel and Future hits the NYC-area on 10/26 at XL Center, 10/27 at Prudential Center, and 10/28 at Barclays Center. Tickets for those shows are still available.

Drake just played his annual OVO Fest last night (8/5), and the insane show included Kanye, The Weeknd, J Cole, Miguel, TLC, A$AP Rocky, Big Sean and more coming out to join him and perform their own songs. The setlist and new song streams below...