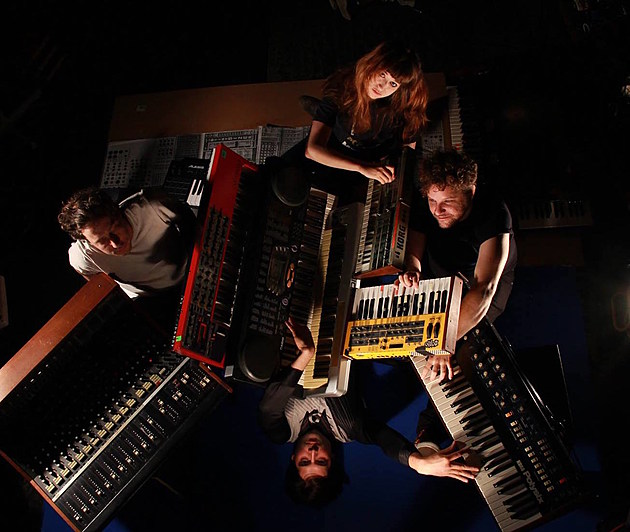 Duchess Says are set to unleash Sciences Nouvelles this week, their first album in five years. (Order yours from Bonsound or Slovenly.) This is their most immediate, hooky batch of synthpunk yet and, for the first time, wild-eyed singer Annie-Claude Deschenes is snarling mostly in English. The attitude is loud and clear no matter what language she's singing in, and the record is a superfun dance through the underground of the megacity of your choice. A stream of the whole thing premieres in this post. Listen below.

Words hardly matters at Duchess Says' captivating, usually totally bonkers live shows, where Annie-Claude seems gleefully possessed and speaking in tongues, with shouts that often sound like "duggadugga BLEEP BLORP ACK ACK ACK!" She will not let an audience passively watch their show: if it's a mosh-friendly crowd, she's egging that on; if it's a bunch of arms-crossed folks, she'll go out on the floor and mess with them. All while the band crank out the fuel to all this good-natured mayhem. No two shows are remotely the same, and I can't recommend seeing Duchess Says enough. Luckily, the band's tour with Future Punx is underway as we speak, hitting NYC this weekend: Shea Stadium on October 14 with Operator and Peeling, and then Elvis Guesthouse on October 15 (no opener listed). Tickets for both shows are on sale now.

Updated dates are listed, along with the album stream and video for "I Repeat Myself," below.