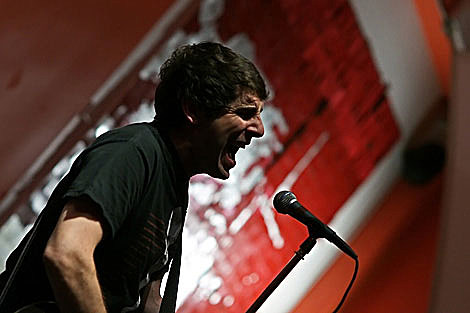 We recently mentioned that Jonah Matranga (Far, onelinedrawing, New End Original, etc) and J. Robbins (Jawbox, Government Issue, Burning Airlines, etc) teamed up to form the band Moral Mazes with Jeff Dean (Dead Ending, All Eyes West) and J's Office of Future Plans bandmate Darren Zentek. Their debut 7", Magic Tommy Jackson, is due out September 2 via Bridge 9 and we've now got the premiere of one its tracks, "Stay Unprepared."

Jonah takes lead vocals, and after experimenting with softer songs in his recent solo material and more polished production on the Far reunion album, "Stay Prepared" sounds like a trip back to his days of the more roughly recorded post-hardcore of New End Original and early Far. Check the track out below, and if you like what you hear you can pre-order it from Bridge 9.

Jonah also has solo dates coming up. He's on a UK tour now, and though a full North American tour hasn't been announced yet, we know he's playing NYC on November 23 at Mercury Lounge. Tickets for that show go on sale Friday (8/1) at noon. All currently known dates are listed, with the new song stream, below...