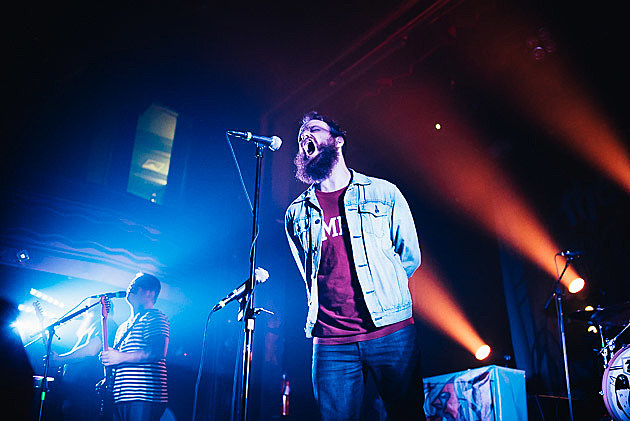 Boundary-pushing pop punk bands The Wonder Years and Motion City Soundtrack are currently on a co-headlining tour together (we caught one of the two NYC shows), and in celebration of that they released a split 7". That's a pretty normal thing for tourmates to do, but this one's different. TWY frontman Dan Campbell and MCS frontman Justin Pierre gave each other the instrumental versions of a song off their new albums ("A Song For Patsy Cline" and "It's A Pleasure To Meet You," respectively) before the other singer had heard the full song, and they wrote and recorded their own vocal melodies and lyrics over it.

The 7" was a very limited release and it's now sold out, but if you weren't one of the lucky ones, the songs are about to be online. We've got the premiere of "(Sort Of) A Song For Patsy Cline" (Wonder Years music, Justin Pierre vocals) in this post. If you're already familiar with the song, it's kinda weird at first when the lyrics/melody are entirely different than the ones you're singing in your head, but it's also interesting to hear the times they sort of coincidentally match up. And if you just take the song for what it is, its a good song! Listen below, and afterwards you can watch the video where the two frontmen talk about the experience of recording these (also below).

While the tour did already hit NYC, it comes back to the Northeast for a show in TWY's hometown of Philly on 11/25 and then ends in NJ on 11/27 at Starland Ballroom (tickets). All remaining dates are listed below.