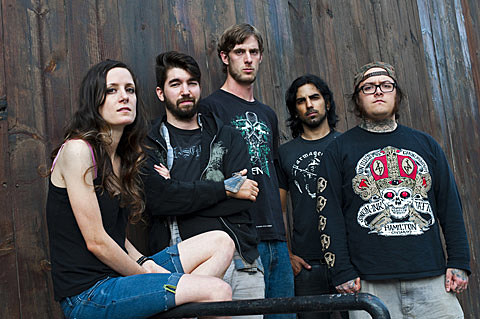 Fuck The Facts want you to Die Miserable. After previewing songs from the aforementioned LP at Public Assembly with From Ashes Rise last month, the fearsome Canadian five-some are prepping to release said rager on their label home Relapse on October 11th. Preorder it now in multiple different configurations.

By the laws of geometry, if you take four left turns you will eventually end up where you started, and the more you take, the more you'll tread on already well-worn paths. Die Miserable is chock full of left turns and definitely sounds like a Fuck The Facts release but like no record prior; it's their unwavering eclectism that has enabled this Canadian band to always keep it interesting. Check out two tracks of grindy-death-groovy-thrash-crust-core from Die Miserable below, including the album opener "Drift" which makes its debut here.

All tour dates and song streams are below.