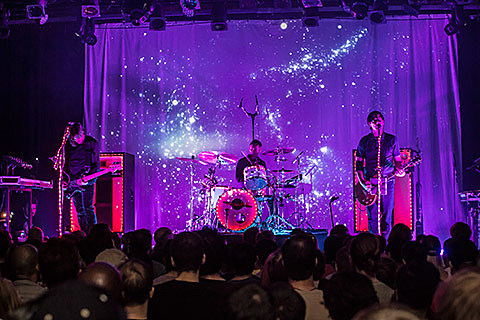 Reformed alt-rockers/astronauts Failure have released another new studio track. This one is titled "The Focus" and, true to its name, it's a three-minute slice of straight-ahead rock that could make an impact on the radio, if such a thing still exists (RIP, Casey Kasem). Of course, "The Focus" runs a bit deeper than just a ditty in the way of most Failure. Singer/guitarist Ken Andrews lays the downtrodden melancholy on thick, giving the song a richer flavor. Plus, the laborious studio-craft pays off if you're a tone dork, supplying a spacy sound that will swallow you whole.

The band has been playing "The Focus" live on tour, something Ken Andrews has been calling a reformation instead of a reunion:

I see this more as a reforming rather than a reunion. To me a reunion is playing a few shows and then that's it. It's done. We're going to do a full new album and then a touring cycle on that album at least. After that, we really don't know.

The band is currently wrapping up their Trees of Stars tour before playing Riot Fest and Fun Fun Fun Fest.