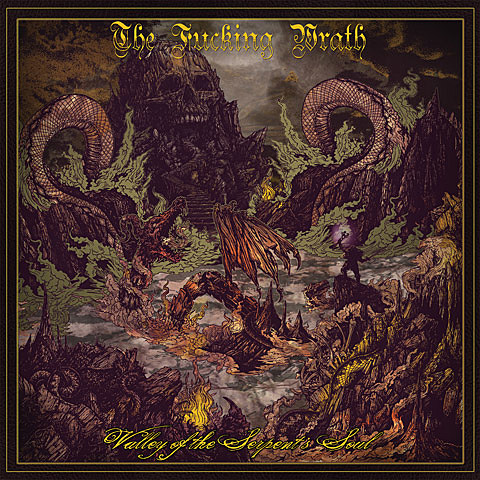 Enron got in trouble for it. So did most of Wall Street. And while the art of Valley Of The Serpent's Soul isn't exactly a federal offense, some may claim that it borders on deceptive practices; the skulls/dragons/warrior indicate a throwback to a retro-Dio style wail, high-tops, and a hesher type attitude. Make no mistake though, The Fucking Wrath is 100% pure ass-kicking beer-swilling rock-n-roll.

Much like their contemporaries Saviours or Red Fang, The Fucking Wrath aren't reinventing the wheel on their new Tee Pee released LP Valley Of The Serpent's Soul, but it's hard to deny tracks with such raw swagger. With a crunchy guitar tone and cigarette-and-whiskey-damaged vocals, tracks like "The Question" make for the perfect soundtrack for a Harley, a fifth of Jack Daniels and a stretch of open road. Check out "The Question" streaming below for the first time.

The Fucking Wrath recently supported Moab at their record release party (with Wino!). Stream all of Moab's Ab Ovo, and pick it up now via Kemado too.

The Fucking Wrath are hitting the road in October, including a trip to NYC for CMJ. More details are on the way, and all tour dates and that song stream is below.

--
The Fucking Wrath - The Question