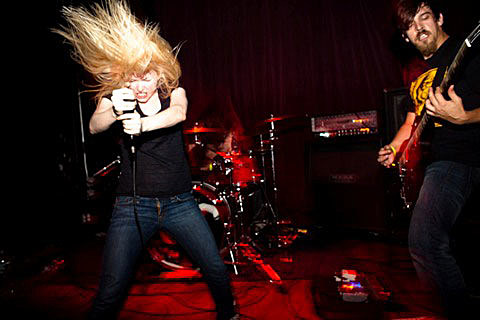 I've seen Salome my fair share of times in the past year, with each performance somehow inching further down the "mouth-agape-with-awe" scale than the last. They destroyed at my SXSW day party, then proceeded to better that on Dark Castle's gear at the Profound Lore/20 Buck Spin showcase. Then over two nights in July, the band decimated both Union Pool and Cake Shop with assists from Landmine Marathon (on both nights), Wetnurse, and Batillus. Get Salome on stage, and they are a juggernaut.

Every single time I saw live, them they trotted out a new jam from their forthcoming LP Terminal, like "Master Failure". Roaring with doom power, yet thrashy-at-moments, and rife with tension, new songs like "Master Failure" and title track "Terminal" are raw, punishing and emotional, and demonstrate the band moving into different territory than they explored on their impressive debut. Stream/download both mentioned new songs below, and look for Terminal on Profound Lore on 11/9. This record will end up on a few year-end lists.

In addition, be on the look out for some live dates when they appear. You'll thank me for it later.

Dig on those tracks and some video of some other new tracks from the LP including "The Message", part of "Epidemic", below.