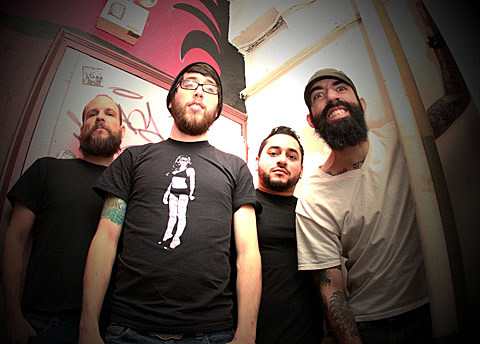 Like pretty much any genre of music that dares to call itself a "scene", NY hardcore is littered with bands that ape a very shallow pool of few. Tiger Flowers is a NYC hardcore band, but they don't subscribe to many of the trappings that befall so many of the Madball/Terror worshippers of today. Instead, the band takes influence from elders who pushed the genre into new directions, like Deadguy, Converge, and Rorschach, and add in metal influences rooted in hardcore like Unsane and Today Is The Day. What emerges is a cocktail of furious hardcore interjected with chaotic blasts of screaming feedback, time changes, doomy-riffs and most importantly, delivered with tons of live energy.

Its a bit hard to believe that a live band as potent as Tiger Flowers have yet to release their debut EP, but The Path Less Traveled Records will right that wrong when they release it on September 20th. Fans of Tiger Flowers are most likely familiar with some of these live staples like "Drag" or "Last Horse". Listen to studio versions of both below, the latter of which makes its debut in this post. If Tiger Flowers can do this much harm on their first EP, its hard to imagine what they'll do with a long-player.

Tiger Flowers have a couple dates lined up in the coming weeks, including a FREE Record Release party on 9/19 at Saint Vitus with Meek Is Murder and State Graves. Tiger Flowers will also play Precious Metal on 10/10 with Toronto's Vilipend. Meek is Murder also plays Acheron on 9/18, the night before Saint Vitus, with Southern Lord signees Dead In The Dirt, In The Shit & Scowl.

Song streams and some video is below.