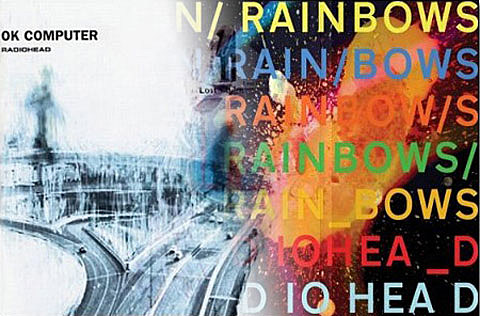 This is surely old "news" to many (by the way, Ultraista play LPR Wednesday), but I never tried it until this new Buzzfeed article which says:

Oh, that wacky Thom Yorke. When he isn't staring joylessly into rainy window panes, there's a chance the rascally Radiohead frontman is plotting out decade-spanning musical projects meant to blow your feeble human mind. As most diehard Radiohead fans (Radiohead-heads?) could tell you, there was a strong overarching theme of "tens" surrounding the band's 2007 release, "In Rainbows" -- it was announced ten days before release, there are ten letters in the title -- capped off by the fact that it came out ten years after another of the group's landmark albums, 1997's "OK Computer," another title with exactly ten letters. So what does any of this mean, exactly? When shuffled together with a ten-second crossfade between tracks, the albums go really, really well together. A bit too well, actually, like they're two halves of one big, beautiful whole. For extra mind-boggle-ocity, the two titles, when combined, leave us with this clever anagram:

Filed Under: In Rainbows, OK Computer, Radiohead
Categories: Music News
Comments
Leave A Comment
Pitchfork publishes a new 150 Best Albums of the 1990s list
Pitchfork publishes a new Best Songs of the 1990s list
36 New Songs Out Today
The Callous Daoboys’ mathcore is for everyone: “I don’t want to be this middling heavy band, I wanna be The 1975″
“There’s no Radiohead at the moment,” says Ed O’Brien
Thom Yorke shares solo rework of Radiohead’s “Bloom” for Greenpeace ad