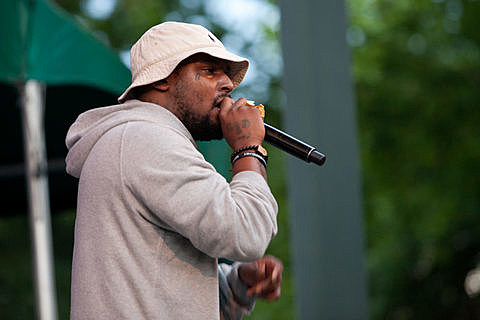 We're still waiting for full details on the new Schoolboy Q album, Oxymoron, but in the meantime, Q just dropped a new single, "Collard Greens," which will presumably appear on the album, and it's one of his best yet. It's got a guest verse from his Black Hippy mate Kendrick Lamar (who just played Governors Ball), but that isn't even the most exciting part. While Q's past memorable songs tend to lean towards party-rap ("Hands on the Wheel," "There He Go"), the beat and the hook on "Collard Greens" cover new ground for the rapper. Some of his trippiest and most forward-thinking stuff yet. It was produced by THC, who also worked on Kendrick's "Cartoon & Cereal" and "m.A.A.d city" and Q's "Oxy Music." Check it out below.

The entire Black Hippy crew is on this year's Rock the Bells and Made In America festivals.